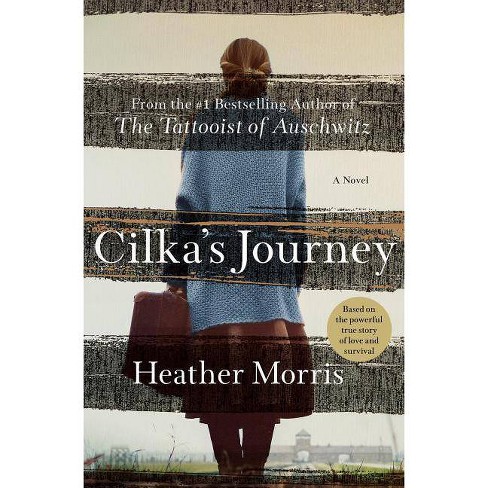 From the author of the bestseller, The Tattooist of Auschwitz, comes a novel based on an incredible true story of a 16-year-old who learns quickly that power, even unwillingly given, equals survival.

From the author of the multi-million copy bestseller The Tattooist of Auschwitz comes a new novel based on a riveting true story of love and resilience.

Her beauty saved her -- and condemned her. Cilka is just sixteen years old when she is taken to Auschwitz-Birkenau Concentration Camp in 1942, where the commandant immediately notices how beautiful she is. Forcibly separated from the other women prisoners, Cilka learns quickly that power, even unwillingly taken, equals survival. When the war is over and the camp is liberated, freedom is not granted to Cilka: She is charged as a collaborator for sleeping with the enemy and sent to a Siberian prison camp. But did she really have a choice? And where do the lines of morality lie for Cilka, who was send to Auschwitz when she was still a child? In Siberia, Cilka faces challenges both new and horribly familiar, including the unwanted attention of the guards. But when she meets a kind female doctor, Cilka is taken under her wing and begins to tend to the ill in the camp, struggling to care for them under brutal conditions. Confronting death and terror daily, Cilka discovers a strength she never knew she had. And when she begins to tentatively form bonds and relationships in this harsh, new reality, Cilka finds that despite everything that has happened to her, there is room in her heart for love. From child to woman, from woman to healer, Cilka's journey illuminates the resilience of the human spirit--and the will we have to survive.

HEATHER MORRIS is a native of New Zealand, now resident in Australia. For several years, while working in a large public hospital in Melbourne, she studied and wrote screenplays, one of which was optioned by an Academy Award-winning screenwriter in the US. In 2003, Heather was introduced to an elderly gentleman who 'might just have a story worth telling'. The day she met Lale Sokolov changed both their lives. Their friendship grew and Lale embarked on a journey of self-scrutiny, entrusting the innermost details of his life during the Holocaust to her. Heather originally wrote Lale's story as a screenplay - which ranked high in international competitions - before reshaping it into her debut novel, The Tattooist of Auschwitz.
New York Times Best Seller
Book that has been on the New York Times Best Sellers list
If the item details above aren’t accurate or complete, we want to know about it.

Powerful, Glad I Read It

5 out of 5 stars
Would recommend
readatnight00 - 3 years ago
I decided to rate this book a 5/5 because Cilka's Journey is different from other holocaust novels I've read. Cilka has spent years submitting to violence against her body and mind, is now tired and resigned to her fate. The story tells about the horrors women faced at concentration camps, but the emphasis is on the psychological trauma they developed. We see women with survivor's guilt, Stockholm syndrome, addiction, how they come to normalize and domesticize their situation (similarly to men who went to war), etc. At moments I forget I'm reading about prisoners at a camp and I tell myself things aren't so bad, then I have to pause because this is the mentality these women had to force themselves into in order to survive. It's an incredibly uncomfortable book but very telling of the conditions.
3 guests found this review helpful. Did you?

5 out of 5 stars
Would recommend
Kwhitneyf - 3 years ago, Verified purchaser
I read the first book so I was eager to continue with this person and was not disappointed. The book is based on a real person however there have been changes so it is not totally accurate but still a fascinating read! Cilka was so young and brave-I couldn't put the book down!
1 guest found this review helpful. Did you?