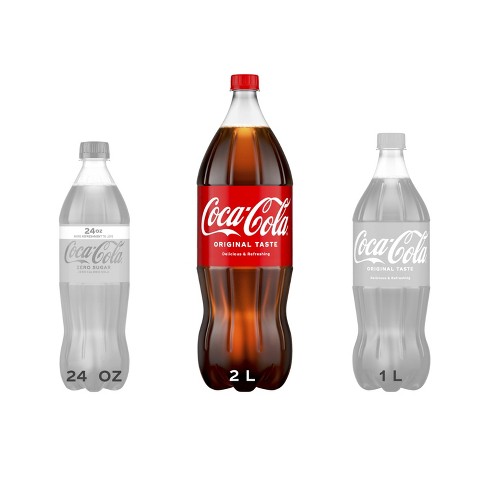 Contains: Does Not Contain Any of the 8 Major Allergens
State of Readiness: Ready to Drink
Form: Liquid
Package Quantity: 1
Carbonation type 1: Carbonated
Net weight: 2 Liter
Beverage container material: Plastic
TCIN: 12958783
UPC: 049000050103
Item Number (DPCI): 271-10-0124
Origin: Made in the USA or Imported
Grocery Disclaimer:
Content on this site is for reference purposes only. Target does not represent or warrant that the nutrition, ingredient, allergen and other product information on our Web or Mobile sites are accurate or complete, since this information comes from the product manufacturers. On occasion, manufacturers may improve or change their product formulas and update their labels. We recommend that you do not rely solely on the information presented on our Web or Mobile sites and that you review the product's label or contact the manufacturer directly if you have specific product concerns or questions. If you have specific healthcare concerns or questions about the products displayed, please contact your licensed healthcare professional for advice or answers. Any additional pictures are suggested servings only.

Carefully crafted in 1886, its great taste has stood the test of time. Something so delicious, so unique and so familiar, it’s what makes you think “Coca-Cola” whenever you hear “soft drink.” Between that perfect taste and refreshing fizz, it’s sure to give you that “ahhh” moment whenever you want it.

Coca-Cola is available in many different options in addition to Original Taste, including a variety of all-time favorite flavors like Coca-Cola Cherry and Coca-Cola Vanilla. Looking for something zero sugar or caffeine free? Then look no further than Coca-Cola Zero Sugar and Coca-Cola Caffeine Free. Whatever you’re looking for in a soda, there’s a Coca-Cola to satisfy your taste buds.

Enjoy Coca-Cola Original Taste.
If the item details above aren’t accurate or complete, we want to know about it.

Serving Per Container: About 6

5 out of 5 stars
Allegra - 3 months ago, Verified purchaser
Exactly what I needed for my easy kick back meal
Did you find this review helpful?

Coke and a smile, thats what the world needs 

5 out of 5 stars
Would recommend
Cherry B - 5 months ago, Verified purchaser
Classic coke flavor, we recently tried starlight MAX as well and it was pretty good as well. Nothing wrong aside from the occasional sticky bottle. I have never received an expired bottle from Target for delivery or pickup. Always tastes fresh and always sealed.
5.0
value
out of 5
value: 5 out of 5
5.0
quality
out of 5
quality: 5 out of 5
5.0
taste
out of 5
taste: 5 out of 5
Did you find this review helpful?

5 out of 5 stars
Laura - 6 months ago, Verified purchaser
My favorite drink!! So refreshing
Did you find this review helpful?

5 out of 5 stars
Would recommend
Stephaniea86 - 7 months ago, Verified purchaser
Good Price. Love Coke
Did you find this review helpful?

5 out of 5 stars
Linda - 8 months ago, Verified purchaser
The original coca cola of my childhood used regular sugar, which is easier on your pancreas and a LOT easier on the environment, and didn't involved genetic meddling. You can only get that really good coke from Mexico now, and it's worth it, but it's expensive. This is the coke of today. It's cheaper than the Mexican import, and does the job of giving you some caffeine and bubbles and quenches thirst. It's much, much safer than diet coke! Fake sugar fools your pancreas into releasing insulin but there's no sugar in your system, so the sudden influx of insulin makes you crave high calorie sweets to offset the insulin. That's actually worse for losing weight than just drinking regular coke. That's why you see so many very overweight people carrying diet soda with them. There's a connection between diet sodas and diabetes and weight gain, and even other pancreatic problems (I'm a biologist). So just get good old coca cola regular and don't overdo, and you're good to go. I also put them out for delivery people to give them a pick me up as they go on their mandated rushed route that doesn't allow them to stop. They usually take one
Did you find this review helpful?

5 out of 5 stars
Nikolett - 9 months ago, Verified purchaser
Never drink Pepsi never liked the taste This is the real thing
1 guest found this review helpful. Did you?

Coke is a staple

5 out of 5 stars
allisonm204 - 11 months ago
originally posted on influenster.com

Coke is a staple when it comes to any get together! No one can deny the love of this classic beverage!
7 guests found this review helpful. Did you?

How can you go

5 out of 5 stars
channyl1 - 11 months ago
originally posted on influenster.com

How can you go wrong? Lots of flavor, lots of bubbles. Great value, especially when the local grocery store is running sales. We buy a couple cases to keep in the garage. Of course I’d recommend this delicious libation to any and all!!
5 guests found this review helpful. Did you?

Ohhhh don’t get me

5 out of 5 stars
marinal5928 - 11 months ago
originally posted on influenster.com

Ohhhh don’t get me started on my addiction to coke, I buy the big box of cans and dive in. Coke with a good meal is out of this world, I try not to just drink coke throughout the day so I drink it with yummy food and it hits different
9 guests found this review helpful. Did you?

Coca-Cola is a classic.

4 out of 5 stars
missstefanie - 11 months ago
originally posted on influenster.com

Coca-Cola is a classic. The taste is refreshing and taste great with so many different foods. Enjoy it chilled over ice or right out of the refrigerator. Try not to drink too many but it’s just something about classic Coca-Cola that keeps you coming back for more!
12 guests found this review helpful. Did you?

This is my all-time

5 out of 5 stars
kaytiejeannn - 11 months ago
originally posted on influenster.com

This is my all-time favorite pop. I love the flavor and it’s super affordable. I love drinking it with my dinner and with my lunch. 
6 guests found this review helpful. Did you?