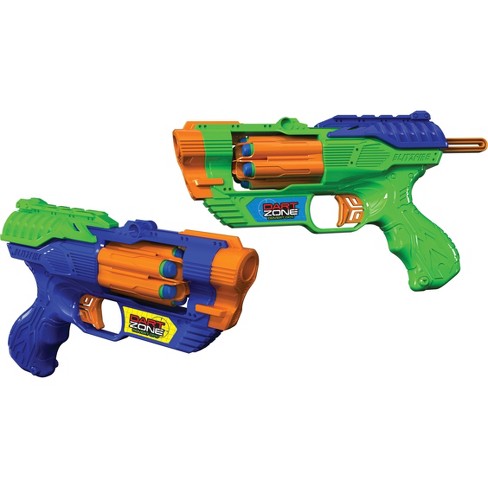 $12.99
only at target¬
4.3 out of 5 stars with 19 reviews
1919 ratings
WARNING: choking hazard - small parts. Not for children under 3 yrs.
Shipping
Free standard shipping with RedCard
Loading, please wait...
Help us improve this page

The Dart Zone BlitzFire Quickshot Blaster is a double-pack of action including two accurate dart blasters. Auto-advance rotating cylinders ensure rapid blasting. Deliver high-performance and great value with this 2-pack blaster pack. Includes 2 Blasters and 12 Universal Darts. These quick shot blasters offer maximum efficiency in the heat of any dart battle with their 6-dart auto-advance rotating cylinders and darts that fly up to 80 feet! These high performing waffle tip foam darts provide pinpoint accuracy and are compatible with all Dart Zone Blasters and most standard blasters from leading brand. Get your Dart Zone Blitzfire Quickshot Combo Pack and take on everyone in your foam dart blaster game! Recommended for ages 8 and up.

Averages 78 FPS; one blaster is somewhat defective, but both are pretty strong.

3 out of 5 stars
Velocity - 8 months ago, Verified purchaser
My ProChrono Digital chronograph measured the speed of the darts fired by these stock Dart Zone Blitzfire blasters at an average of 78 feet per second (FPS) using Nerf Elite darts (they are capable of shooting any standard Nerf Elite darts; blue, green, white, orange, purple/grey, Starwars themed, Accustrike, battle camouflage print, and decorated Rebelle darts). The standard average velocity of a Nerf Elite blaster is 70 FPS so these are definitely stronger than the average. A lot of the shots were in the 80 FPS range. However, note that there were also some terrible velocity readings using knockoff aftermarket Nerf darts (some as low as the 50 FPS range). These blasters are made of lower quality plastics than the plastic that Hasbro uses, and as a result, their internal parts are not projected to last as long as most Nerf products. My predominantly blue Blitzfire seems to be defective, as it fires off accidentally when the blaster is primed quickly. This accidental involuntary slippage of the catch mechanism is just sloppy craftsmanship coupled with low quality materials, but it still works if you prime the blaster slowly and calmly (lol, terrible). This is kind of like playing to the Blitzfire’s strength anyway, since the Blitzfire lacks the Slam-fire ability of many of it’s Nerf competition (the ability to fire off darts in rapid succession by holding down the firing trigger and repeatedly priming the blaster to fire a dart off every time it is primed), resulting in some semblance of rapid fire. Since the cylinder of the Blitzfire rotates on the pull of the trigger, Slam-fire is indeed impossible with this blaster. As a side note, whilst testing the blasters over the chronograph, I found that I was able to get a greater percentage of readings over 80 FPS (using Nerf Elite darts). There is a tactical rail that can accept Nerf accessories. There is no doubt in my mind that Dart Zone intended for this to be cross compatible with Nerf tactical rail accessories. It is however lacking the detent that keeps the intended accessory in place, and any such accessory may slide forward and fall off if you are not careful. Well, it is on the priming handle anyway, so most users will probably not even choose to put one on. As far as ergonomics, I am content with the feel of the pistol grip as it is held in hand. Pulling the trigger is labored (especially if the blaster isn’t primed), and this is because of the ratcheting cylinder being connected to the trigger-pull function. The draw weight of the priming handle is a bit excessive and may be hard to pull all the way back for younger users. This is likely due to using a stronger spring that was needed in order to outperform Hasbro’s Nerf products in the area of raw power. But to make the product stronger is not always the best idea, since only a stronger user will be able to use it (further narrowing your projected customer base). In addition, the Blitzfire is made of cheaper quality plastic, and the durability of it’s parts will definitely not be the best, especially with the added pressure on the internal parts from it’s stronger spring. In conclusion, on the playing field the Blitzfire has shown to be more powerful. I have noticed that the Blitzfire used to come with a dart-holding flip-up/down leaf-sight, but these do not come with anything. No worry there, since it is not an important part IMHO. I would like to see Prime Time Toys and Dart Zone put more effort into their product testing. Selling defective blasters like the accidentally firing one that I received is discouraging to say the least. I am okay with using cheaper blasters that can out perform the other blasters on the market but they will need to be able to last.
2.0
broad age appeal
out of 5
broad age appeal: 2 out of 5
3.0
length of play
out of 5
length of play: 3 out of 5
2.0
quality
out of 5
quality: 2 out of 5
4.0
value
out of 5
value: 4 out of 5
1 guest found this review helpful. Did you?
Report review

5 out of 5 stars
Would recommend
She - 11 months ago, Verified purchaser
I’ve now ordered these for 2 different “nerf” parties! They have worked great They will not disappoint
1 guest found this review helpful. Did you?
Report review

1 out of 5 stars
Would not recommend
Julie - 1 year ago, Verified purchaser
My boys bought this less than an hour ago with their own money. I FINALLY let them buy toy guns. It's so tight, it's hard for them to reload, and they've already broken 2 bullets because it was caught and was too tight for them to get them out. Very disappointed. What I thought would be hours of fun on a day off from school ended up being about 3 minutes of excitement followed by frustration and giving up altogether. Perhaps older, stronger kids can handle it better.
1.0
quality
out of 5
quality: 1 out of 5
3.0
broad age appeal
out of 5
broad age appeal: 3 out of 5
1.0
length of play
out of 5
length of play: 1 out of 5
Did you find this review helpful?
Report review

5 out of 5 stars
Would recommend
ACfromKC - 1 year ago
Great price for 2 guns! Love that it comes in a 2pack so both my boys can play. Works with all of their nerf bullets.
Did you find this review helpful?
Report review

Bang For The Buck

5 out of 5 stars
Would recommend
WPB2204 - 1 year ago, Verified purchaser
Talk about bang for the buck. The is LITERALLY bang for the buck! for twelve bucks I get two guns that kick more you-know-what than most thirty dollar guns. These are seriously cool powerful guns. Other reviewers have said "Definitly would buy again." Well I definitely AM buying again coz these are too good to be true! For the cost of one ineffective nerf branded gun, I can get two of these bundles and have four times the foam bullet carnage!
4.0
quality
out of 5
quality: 4 out of 5
5.0
broad age appeal
out of 5
broad age appeal: 5 out of 5
5.0
length of play
out of 5
length of play: 5 out of 5
Did you find this review helpful?
Report review