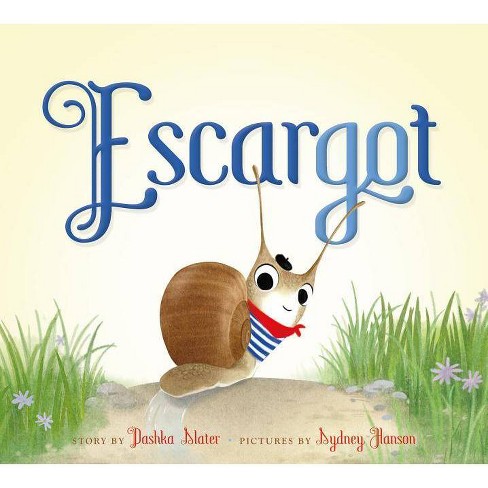 Escargot is a charming, funny, interactive picture book that is ideal for picky eaters and animal lovers alike.

Bonjour! Escargot is a beautiful French snail who wants only two things:

1. To be your favorite animal.
2. To get to the delicious salad at the end of the book. But when he gets to the salad, he discovers that there's a carrot in it. And Escargot hates carrots. But when he finally tries one--with a little help from you!--he discovers that it's not so bad after all! A charming and interactive picture book ideal for picky eaters and animal lovers alike.

Say bonjour to your new favorite animal, the garden snail!...In Hanson's soft, cartoonish illustrations, Escargot's hammy expressions are perfectly in keeping with his gently boastful narrative. Give this charming read-aloud a little extra joie de vivre by reading it in your best French accent. --Booklist A charming little French snail takes center stage as it entices a child to share a meal.It's hard to imagine an escargot heading toward a salad as destined to be anything other than part of the dish, but this engaging snail upends convention...An unusual, tongue-in-cheek aid to getting children to eat a disliked food--even the dreaded carrot.--Kirkus Reviews Escargot's voice is parfait, an airy blend of ego and need masterfully balanced in witty and well-turned sentences that leave plenty of room for audiences to get the joke...Trim, controlled pencil and watercolor art gives Escargot the inevitable French sailor's shirt, neckerchief, and teeny beret, but the jaunty guy's wide, sincere eyes reveal the depth of his yearning snail soul--and make for some great comic faces. --Bulletin of the Center for Children's Books, starred review

Dashka Slater is the New York Times-bestselling author of The 57 Bus which also won the Stonewall Book Award and was a YALSA finalist. She has also written many other books, including Escargot which won the Wanda Gag Book Award, Baby Shoes, The Antlered Ship, which was a Junior Library Guild Selection and received four starred reviews, and Dangerously Ever After. She is also an award-winning journalist whose articles have appeared in Newsweek, Salon, The New York Times Magazine, and Mother Jones. She lives in California. dashkaslater.com

Sydney Hanson was raised in Minnesota alongside numerous pets and brothers. She has worked for several animation shops, including Nickelodeon and Disney Interactive. She lives in California.
If the item details above aren’t accurate or complete, we want to know about it. Report incorrect product info.