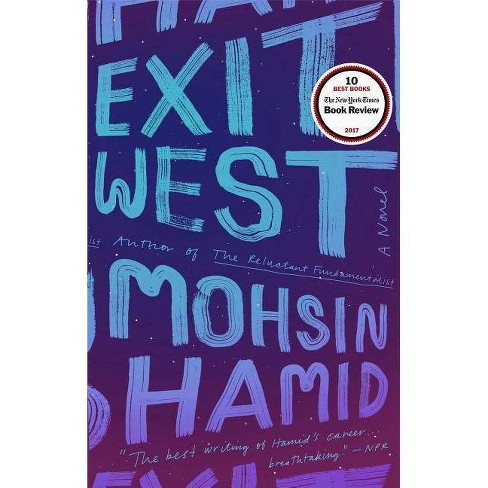 "In a country teetering on the brink of civil war, two young people meet--sensual, fiercely independent Nadia and gentle, restrained Saeed. They embark on a furtive love affair, thrust into premature intimacy by the unrest roiling their city. When it explodes, turning familiar streets into a patchwork of checkpoints and bomb blasts, they begin to hear whispers about doors--doors that can whisk people far away, if perilously and for a price. As violence and the threat of violence escalate, Nadia and Saeed decide that they no longer have a choice. Leaving their homeland and their old lives behind, they find a door and step through. An epic compressed into a slender page-turner, Exit West is both completely of our time and for all time."--

WINNER OF THE L.A. TIMES BOOK PRIZE FOR FICTION and THE ASPEN WORDS LITERARY PRIZE

"A breathtaking novel...[that] arrives at an urgent time." --NPR

"It was as if Hamid knew what was going to happen to America and the world, and gave us a road map to our future... At once terrifying and ... oddly hopeful." --Ayelet Waldman, The New York Times Book Review

A New York Times bestseller, the astonishingly visionary love story that imagines the forces that drive ordinary people from their homes into the uncertain embrace of new lands. In a country teetering on the brink of civil war, two young people meet--sensual, fiercely independent Nadia and gentle, restrained Saeed. They embark on a furtive love affair, and are soon cloistered in a premature intimacy by the unrest roiling their city. When it explodes, turning familiar streets into a patchwork of checkpoints and bomb blasts, they begin to hear whispers about doors--doors that can whisk people far away, if perilously and for a price. As the violence escalates, Nadia and Saeed decide that they no longer have a choice. Leaving their homeland and their old lives behind, they find a door and step through. . . . Exit West follows these remarkable characters as they emerge into an alien and uncertain future, struggling to hold on to each other, to their past, to the very sense of who they are. Profoundly intimate and powerfully inventive, it tells an unforgettable story of love, loyalty, and courage that is both completely of our time and for all time.

FINALIST FOR THE 2017 MAN BOOKER PRIZE, THE NATIONAL BOOK CRITICS CIRCLE AWARDS, and THE KIRKUS AWARD "Hamid exploits fiction's capacity to elicit empathy and identification to imagine a better world. It is also a possible world. Exit West does not lead to utopia, but to a near future and the dim shapes of strangers that we can see through a distant doorway. All we have to do is step through it and meet them. --Viet Thanh Nguyen, The New York Times Book Review (cover) "In spare, crystalline prose, Hamid conveys the experience of living in a city under siege with sharp, stabbing immediacy. He shows just how swiftly ordinary life -- with all its banal rituals and routines -- can morph into the defensive crouch of life in a war zone. ... [and] how insidiously violence alters the calculus of daily life. ... By mixing the real and the surreal, and using old fairy-tale magic, Hamid has created a fictional universe that captures the global perils percolating beneath today's headlines." --Michiko Kakutani, New York Times "Lyrical and urgent, the globalist novel evokes the dreams and disillusionments that follow Saeed and Nadia....and peels away the dross of bigotry to expose the beauty of our common humanity." --O, the Oprah Magazine "A beautiful and very detailed look at what it means to be an immigrant...An incredible book." -Sarah Jessica Parker on Read it Forward

"A little like the eerily significant Margaret Atwood novel, this love story amid the rubble of violence, uncertainty, and modernity feels at once otherworldly and all too real." --New York Magazine's The Strategist This is the best writing of Hamid's career... Readers will find themselves going back and savoring each paragraph several times before moving on. He's that good. ... Breathtaking." --NPR.org

"Nearly every page reflects the tangible impact of life during wartime--not just the blood and gunsmoke of daily bombardments, but the quieter collateral damage that seeps in. The true magic of [Exit West] is how it manages to render it all in a narrative so moving, audacious, and indelibly human." -Entertainment Weekly, "A rating"

"Hamid rewrites the world as a place thoroughly, gorgeously, and permanently overrun by refugees and migrants. ... But, still, he depicts the world as resolutely beautiful and, at its core, unchanged. The novel feels immediately canonical, so firm and unerring is Hamid's understanding of our time and its most pressing questions." --NewYorker.com No novel is really about the cliche called 'the human condition, ' but good novels expose and interpret the particular condition of the humans in their charge, and this is what Hamid has achieved here. If in its physical and perilous immediacy Nadia and Saeed's condition is alien to the mass of us, Exit West makes a final, certain declaration of affinity: 'We are all migrants through time.'" --Washington Post "Skillful and panoramic from the outset... [A] meticulously crafted, ambitious story of many layers, many geopolitical realities, many lives and circumstances...Here is the world, he seems to be saying, the direction we're hurtling in. How are we going to mitigate the damage we've done?" -The New York Review of Books "Like the Lion, the Witch, and the Wardrobe, but set in the real world. You'll be hearing about it, so get into it now." --TheSkimm "Spellbinding." -Buzzfeed

"Hamid graphically explores a fundamental and important ontological question: Is it possible for us to conceive of ourselves at all, except in juxtaposition to an "other"?... What is remarkable about Hamid's narrative is that war is not, in fact, able to marginalize the "precious mundanity" of everyday life. Instead -- and herein lies Hamid's genius as a storyteller -- the mundanity, the minor joys of life, like bringing flowers to a lover, smoking a joint, and looking at stars, compete with the horrors of war." -Los Angeles Times "In an era when powerful ruling groups -- often in the minority -- are gripped by a sense of religious and ethnic nativism, Mohsin offers these two, the millions they represent, and us, comfort: that plausible, desirable futures can be imagined, that new tribes may be formed, and that life will go on... If we are looking for the story of our time, one that can project a future that is both more bleak and more hopeful than that which we can yet envision, this novel is faultless." -Boston Globe

"[A] slender treasure of a novel." -NPR's Book Concierge

Terrifying, hopeful, and all too relevant. --People Magazine

"It was as if Hamid knew what was going to happen to America and the world, and gave us a road map to our future... This book blew the top off my head. It's at once terrifying and, in the end, oddly hopeful." -Ayelet Waldman, New York Times Book Review If there is one book everyone should read ASAP, it is Mohsin Hamid's Exit West...Short, unsentimental, deeply intimate, and so very powerful. --Goop "Spare and haunting, it's magical realism meets the all-too-real." -W Magazine "Taut but haunting." -Vanity Fair

Powerfully evokes the violence and anxiety of lives lived 'under the drone-crossed sky.'" --Time Magazine "Hamid's timely and spare new novel confronts the inevitability of mass global immigration, the unbroken cycle of violence and the indomitable human will to connect and love." --Huffington Post "A great romance that is also a story of refugees; this couldn't be more timely." --Flavorwire "Exit West is a compelling read that will make you think about the times we are living in right now." -PopSugar Beautiful. -The Rumpus "Eerily prescient." -Joyce Carol Oates, The New Yorker.com

"[A] thought experiment that pivots on the crucial figure of this century: the migrant... Hamid's cautious, even fastidious prose makes the sudden flashes of social breakdown all the more affecting...Evading the lure of both the utopian and the dystopian, Exit West makes some rough early sketches of the world that must come if we (or is it 'you'?) are to avoid walling out the rest of the human race." -Financial Times

"Exit West operates on another plane... Beautiful and poetic even at its most devastating." -Book Riot

Mohsin Hamid is the author of the international bestsellers Exit West and The Reluctant Fundamentalist, both finalists for the Man Booker Prize. His first novel, Moth Smoke, won the Betty Trask Award and was a finalist for the PEN/Hemingway Foundation Award. His essays, a number of them collected as Discontent and Its Civilizations, have appeared in The New York Times, the Washington Post, The New York Review of Books, and elsewhere. He lives in Lahore, Pakistan.
If the item details above aren’t accurate or complete, we want to know about it. Report incorrect product info.