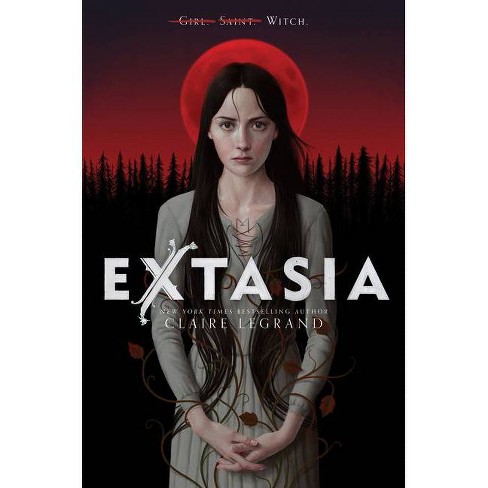 In a postapocalyptic world, sixteen-year-old Saint Amity joins a coven and sets out on a quest to summon the Devil in order to protect her village, which is controlled by group of pious elders.

From New York Times bestselling author Claire Legrand comes a new, bone-chilling YA horror novel about a girl who joins a coven to root out a vicious evil that's stalking her village. Perfect for fans of The Handmaid's Tale and The Grace Year.

Her name is unimportant.

All you must know is that today she will become one of the four saints of Haven. The elders will mark her and place the red hood on her head. With her sisters, she will stand against the evil power that lives beneath the black mountain--an evil which has already killed nine of her village's men.

She will tell no one of the white-eyed beasts that follow her. Or the faceless gray women tall as houses. Or the girls she saw kissing in the elm grove.

Today she will be a saint of Haven. She will rid her family of her mother's shame at last and save her people from destruction. She is not afraid. Are you?

This searing and lyrically written novel by the critically acclaimed author of Sawkill Girls beckons readers to follow its fierce heroine into a world filled with secrets and blood--where the truth is buried in lies and a devastating power waits, seething, for someone brave enough to use it.

"The Handmaid's Tale meets The Craft. Readers will be riveted by Legrand's fierce female characters and their harrowing emotional journey." -- Publishers Weekly

"Legrand successfully brings a supernatural gruesomeness to her exploration of morality and agency." -- Bulletin of the Center for Children's Books

"Slow-burn horror meets a queer coming-of-age story, with compassionately explored themes of feminism, grief, trauma, faith, and abuse. A YA fantasy complement to Naomi Alderman's The Power; fans of Legrand will find this an interesting new approach, as will readers of Rory Power and House of Hollow by Krystal Sutherland." -- School Library Journal

"Legrand crafts a fiercely unsubtle feminist fantasy that takes on the patriarchy and the toxicity of hate." -- Booklist

Praise for Sawkill Girls: ★"Through this dank, atmospheric, and genuinely frightening narrative, Legrand weaves powerful threads about the dangerous journey of growing up female...an intensely character-driven story about girls who support each other, girls who betray each other, and girls who love each other in many complicated ways. Strange, eerie, and unforgettable." -- ALA Booklist (starred review)

★"This atmospheric, Gothic-flavored chiller, which mingles elements of dark fairy tales and outright horror... includes an asexual character and a beautifully wrought queer romance, [and] focuses on the power of female friendship and what it means to pit women against one another in fiction and in life." -- Publishers Weekly (starred review)

★"Legrand accomplishes the kind of slow-building tension and mounting horror that will give readers night terrors. Read this book, then lock it in the freezer." -- Shelf Awareness

"Part spine-chilling horror story and part coming-of-age lesbian romance... If you are looking for something to scare you awake at night, this is the book for you." -- Kirkus Reviews

"With prose as fierce and uncompromising as its three main characters, SAWKILL GIRLS is a fresh and unflinching exploration of female friendship wrapped in a spine-tingling page-turner. Claire Legrand doesn't hold back--and you won't be able to put this book down." -- Courtney Summers, New York Times bestselling author of Sadie

"Reader, hang on for dear life. Sawkill Girls is a wild, gorgeous, and rich coming-of-age story about complicity, female camaraderie, and power." -- Sarah Gailey, author of River of Teeth

"An eerie, atmospheric assertion of female strength." -- Mindy McGinnis, author of The Female of the Species

To the Lighthouse - by Virginia Woolf

Crown of Midnight - (Throne of Glass) by Sarah J Maas