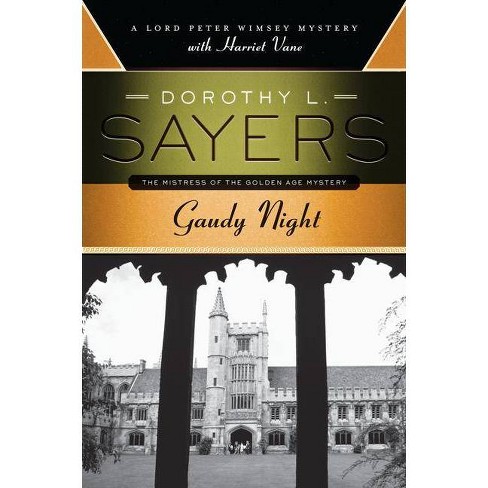 "Gaudy Night stands out even among Miss Sayers's novels. And Miss Sayers has long stood in a class by herself." --Times Literary Supplement

The great Dorothy L. Sayers is considered by many to be the premier detective novelist of the Golden Age, and her dashing sleuth, Lord Peter Wimsey, one of mystery fiction's most enduring and endearing protagonists. Acclaimed author Ruth Rendell has expressed her admiration for Sayers's work, praising her "great fertility of invention, ingenuity, and wonderful eye for detail." The third Dorothy L. Sayers classic to feature mystery writer Harriet Vane, Gaudy Night features an introduction by Elizabeth George, herself a crime fiction master. Gaudy Night takes Harriet and her paramour, Lord Peter, to Oxford University, Harriet's alma mater, for a reunion, only to find themselves the targets of a nightmare of harassment and mysterious, murderous threats.

When Harriet Vane attends her Oxford reunion, known as the Gaudy, the prim academic setting is haunted by a rash of bizarre pranks: scrawled obscenities, burnt effigies, and poison-pen letters, including one that says, Ask your boyfriend with the title if he likes arsenic in his soup. Some of the notes threaten murder; all are perfectly ghastly; yet in spite of their scurrilous nature, all are perfectly worded. And Harriet finds herself ensnared in a nightmare of romance and terror, with only the tiniest shreds of clues to challenge her powers of detection, and those of her paramour, Lord Peter Wimsey.

"Dorothy Sayers is in a class by herself."--Chicago Tribune

"One of the greatest mystery story writers of this century."--Los Angeles Times

"So excitingly good in its field, so brilliantly planned and so excellently written, that even the weariest able minds and the jumpiest nerves should react pleasingly to it."--New York Times

"Gaudy Night stands out even among Miss Sayers's novels. And Miss Sayers has long stood in a class by herself."--Times Literary Supplement (London)

"Very skillfull writing. Miss Sayers has done a real tour de force, and done it with ease and grace."--Saturday Review
If the item details above aren’t accurate or complete, we want to know about it. Report incorrect product info.