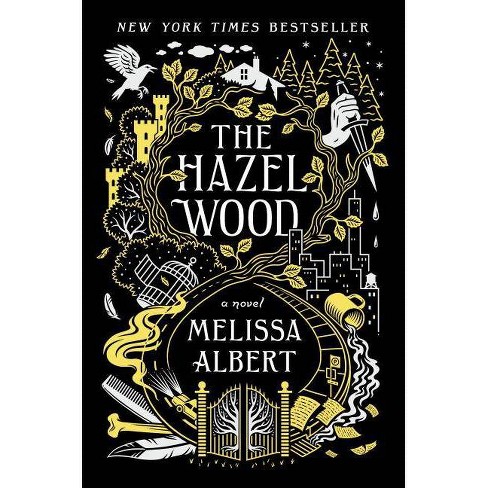 $10.92
undefined out of 5 stars with 0 reviews
be the first!be the first! ratings
Help us improve this page

Albert delivers a fierce, captivating contemporary fantasy about a 17-year-old girl who must venture into the world behind a pitch-dark, cult-classic collection of fairy tales to save her mother. Illustrations.

Seventeen-year-old Alice and her mother have spent most of Alice's life on the road, always a step ahead of the uncanny bad luck biting at their heels. But when Alice's grandmother, the reclusive author of a cult-classic book of pitch-dark fairy tales, dies alone on her estate, the Hazel Wood, Alice learns how bad her luck can really get: Her mother is stolen away--by a figure who claims to come from the Hinterland, the cruel supernatural world where her grandmother's stories are set. Alice's only lead is the message her mother left behind: "Stay away from the Hazel Wood."

Alice has long steered clear of her grandmother's cultish fans. But now she has no choice but to ally with classmate Ellery Finch, a Hinterland superfan who may have his own reasons for wanting to help her. To retrieve her mother, Alice must venture first to the Hazel Wood, then into the world where her grandmother's tales began--and where she might find out how her own story went so wrong. Don't miss the New York Times bestselling sequel to The Hazel Wood, The Night Country, out now, or Tales from the Hinterland, coming January 12, 2021!

"Albert seamlessly combines contemporary realism with fantasy, blurring the edges in a way that highlights that place where stories and real life convene, where magic contains truth, and the world as it appears is false, where just about anything can happen, particularly in the pages of a good book. It's a captivating debut." --The New York Times Book Review (Notable Children's Book)

"An original and imaginative fairy tale: thrilling, fascinating, and poignant in equal measure." --Entertainment Weekly (Best YA Book of the Year)

"Insidiously beautiful, this is the opposite of escapist fantasy; it is a story about the imagination's power to loose atrocity into the (mostly) law-abiding confines of the real." --The Guardian (Best Children's Book of the Year)

"A darkly brilliant story of literary obsession, fairy-tale malignancy, and the measures a mother will take to spare her child." --The Wall Street Journal (Best Children's Book of the Year)

"A contemporary fantasy that dwells in an atmospheric, intertwining world of terrifying circumstances; a breathtaking dive into the magic and importance of story in one's identity. 'Story is the fabric of the Hinterland, ' one of the residents tells Alice. Another says, stories 'create the energy that makes this world go. They keep our stars in place.' If this is so, Albert's exquisite wordsmithing and story weaving have kept the stars aloft for a new generation of readers." --Shelf Awareness, starred review "Alice's sharp-edged narration and Althea's terrifying fairy tales, interspersed throughout, build a tantalizing tale of secret histories and magic that carries costs and consequences. There is no happily-ever-after resolution except this: Alice's hard-won right to be in charge of her own story." --Publishers Weekly, starred review "Highly literary, occasionally surreal, and grounded by Alice's clipped, matter-of-fact voice, The Hazel Wood is a dark story that readers will have trouble leaving behind." --Booklist, starred review "Simultaneously wondrous and horrific, dreamlike and bloody, lyrical and creepy, exquisitely haunting and casually, brutally cruel. Not everybody lives, and certainly not 'happily ever after'--but within all the grisly darkness, Alice's fierce integrity and hard-won self-knowledge shine unquenched." --Kirkus Reviews, starred review "The Hazel Wood is thoroughly, creepily captivating, with surprises I never saw coming! Such a refreshing and beautifully written inversion of the classic fairy tale-inspired story." --Kristin Cashore, author of Graceling "This book will be your next literary obsession. Welcome to the Hazel Wood, where bad luck is a living thing, princesses are doomed, and every page contains a wondrously terrible adventure--it's not safe inside these pages, but once you enter, you may never want to leave. The Hazel Wood is pure imagination candy." --Stephanie Garber, author of Caraval

"Dark, spellbinding, and magical. One of the most original books I've read in years--The Hazel Wood is destined to be a classic." --Kami Garcia, author of Beautiful Creatures "Elegant, ethereal, and beautifully brutal, The Hazel Wood is a fairy tale worth falling for. This is a dream of a book I cannot recommend highly enough. It's like falling into a nautilus shell: every time you think you've found the end, another chamber opens. Absolutely breathtaking." --Seanan McGuire, author of Every Heart a Doorway

"Absolutely mesmerizing, magical, and inventive. Hats off to Melissa Albert!" --Karen McManus, author of One of Us Is Lying

Melissa Albert is the author of the Hazel Wood series and a former bookseller and YA lit blogger. Her work has been translated into over twenty languages. She's from Illinois and lives in Brooklyn with her family.
Target Book Club
Book selected for Target Book Club Picks
If the item details above aren’t accurate or complete, we want to know about it. Report incorrect product info.