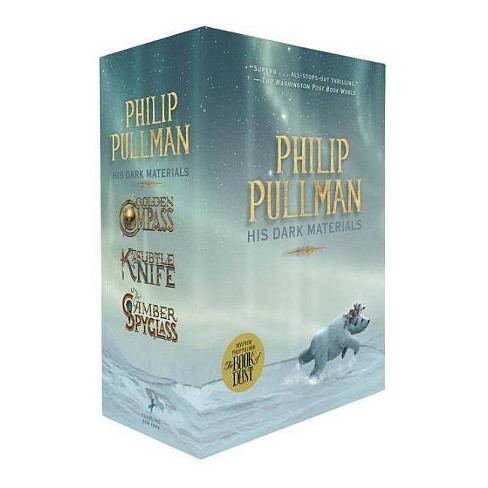 The three novels that make up the His Dark Materials trilogy are available in this boxed paperback set. Includes "The Subtle Knife, The Golden Compass, " and "The Amber Spyglass."

HIS DARK MATERIALS IS NOW AN HBO ORIGINAL SERIES STARRING DAFNE KEEN, RUTH WILSON, JAMES McAVOY, AND LIN-MANUEL MIRANDA! The Golden Compass, The Subtle Knife, and The Amber Spyglass are available together in a collectible His Dark Materials boxed set perfect for any fan or newcomer to this modern fantasy classic series that Entertainment Weekly named one of the all-time greatest, and has graced the New York Times, Wall Street Journal, San Francisco Chronicle, Book Sense, and Publishers Weekly bestseller lists. These thrilling adventures tell the story of Lyra and Will--two ordinary children on a perilous journey through shimmering haunted otherworlds. They will meet witches and armored bears, fallen angels and soul-eating specters. And in the end, the fate of both the living--and the dead--will rely on them. Phillip Pullman's spellbinding His Dark Materials trilogy has captivated readers for over twenty years and won acclaim at every turn. It will have you questioning everything you know about your world and wondering what really lies just out of reach. Don't miss Philip Pullman's epic new trilogy set in the world of His Dark Materials!
** THE BOOK OF DUST **
La Belle Sauvage
The Secret Commonwealth

Praise for THE GOLDEN COMPASS

Marvelous. --The New Yorker "Pullman is quite possibly a genius... Using the lineaments of fantasy to tell the truth about the universal experience of growing up." --Newsweek Praise for THE SUBTLE KNIFE

"Just as quick-moving and unputdownable as The Golden Compass. . . . The mysteries deepen and the wonders grow even more extravagant." --The Washington Post "Pullman's imagination soars . . . A literary rollercoaster ride you won't want to miss."--The Boston Globe "The story gallops with ferocious momentum . . . Devilishly inventive." --The New York Times Book Review Praise for THE AMBER SPYGLASS

War, politics, magic, science, individual lives and cosmic destinies are all here . . . shaped and assembled into a narrative of tremendous pace by a man with a generous, precise intelligence. I am completely enchanted. --The New York Times Book Review

PHILIP PULLMAN is one of the most acclaimed writers working today. He is best known for the His Dark Materials trilogy, which has been named one of the top 100 books of all time by Newsweek and one of the all-time greatest novels by Entertainment Weekly. Pullman was knighted for his services to literature in the 2019 New Year Honours. The Book of Dust, Pullman's eagerly anticipated return to the world of His Dark Materials, will also be a book in three parts. It began with La Belle Sauvage and continues with The Secret Commonwealth. Philip Pullman is the author of many other beloved novels. For younger readers: I Was a Rat!, Count Karlstein, Two Crafty Criminals!, Spring-Heeled Jack, and The Scarecrow and His Servant. For older readers: the Sally Lockhart quartet (The Ruby in the Smoke, The Shadow in the North, The Tiger in the Well, and The Tin Princess), The White Mercedes, and The Broken Bridge. He has written a magnificent collection, Fairy Tales from the Brothers Grimm, and his essays and lectures on writing and storytelling have been gathered in a volume called Dæmon Voices: On Stories and Storytelling. Philip Pullman lives in Oxford, England.
If the item details above aren’t accurate or complete, we want to know about it. Report incorrect product info.