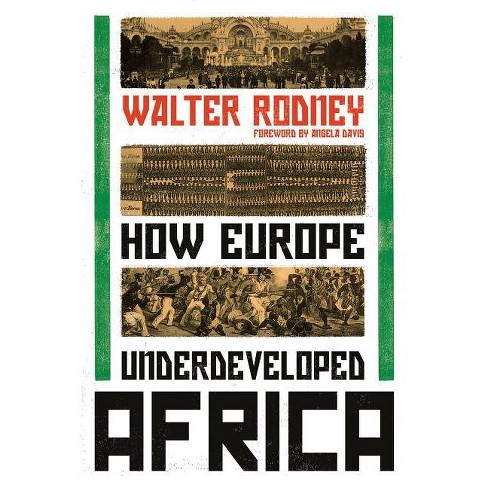 "First published in the UK by Bogle-L'Ouverture Publications 1972."

The classic work of political, economic, and historical analysis, powerfully introduced by Angela Davis In his short life, the Guyanese intellectual Walter Rodney emerged as one of the leading thinkers and activists of the anticolonial revolution, leading movements in North America, South America, the African continent, and the Caribbean. In each locale, Rodney found himself a lightning rod for working class Black Power. His deportation catalyzed 20th century Jamaica's most significant rebellion, the 1968 Rodney riots, and his scholarship trained a generation how to think politics at an international scale. In 1980, shortly after founding of the Working People's Alliance in Guyana, the 38-year-old Rodney would be assassinated. In his magnum opus, How Europe Underdeveloped Africa, Rodney incisively argues that grasping the great divergence between the west and the rest can only be explained as the exploitation of the latter by the former. This meticulously researched analysis of the abiding repercussions of European colonialism on the continent of Africa has not only informed decades of scholarship and activism, it remains an indispensable study for grasping global inequality today.

"Rodney's analysis remains as relevant as it was when first published--a call to arms in the class struggle for racial equality."
--Los Angeles Review of Books "A masterpiece."
--Andy Higginbottom, Redline "Appearing in 1972, How Europe Underdeveloped Africa was a genuine tour de force. It fused, as had never been done in a single volume before, African history in the global sense and underdevelopment theory, Marxism and black nationalism, intellectual passion and political commitment. How Europe Underdeveloped Africa instantly joined a select pan-Africanist canon that would be read at least as much outside as within the academy, an exclusive category that included the two texts that had greatly influenced Rodney's intellectual development, notably James's Black Jacobins and Williams's Capitalism & Slavery, along with Black Reconstruction, W. E. B. Dubois's magisterial work on the struggle for democracy in the United States during the post-Civil War, post-slavery era. How Europe Underdeveloped Africa, however, differed from the above-mentioned works, which were written long after the events they charted occurred. How Europe Underdeveloped Africa, by contrast, was more urgent and immediate, having been produced in the heat of battle, which is to say amid the ongoing struggle of Africans against capitalist and neocolonialist underdevelopment. His purpose in writing the book, Rodney explained in the Preface, was 'to try and reach Africans who wish to explore further the nature of their exploitation, rather than to satisfy the 'standards' set by our oppressors and their spokesmen in the academic world."
--Michael West, Groundings

Walter Rodney was an internationally renowned historian of colonialism and a leader of Black Power and Pan-African movements across the diaspora, most notably the Guyanese Working People's Alliance. His life and work brought together struggles for independence on the African continent with the strivings of the black working classes of North America and the Caribbean basin. On June the 13th, 1980, Rodney was assassinated, most likely by the then-president of Guyana. He was 38 years old.
If the item details above aren’t accurate or complete, we want to know about it.

The Wretched of the Earth - by Frantz Fanon (Paperback)

The Fire Next Time - (Vintage International) by James Baldwin (Paperback)

This Changes Everything - by Naomi Klein (Paperback)

The Groundings with My Brothers - by Walter Rodney (Paperback)