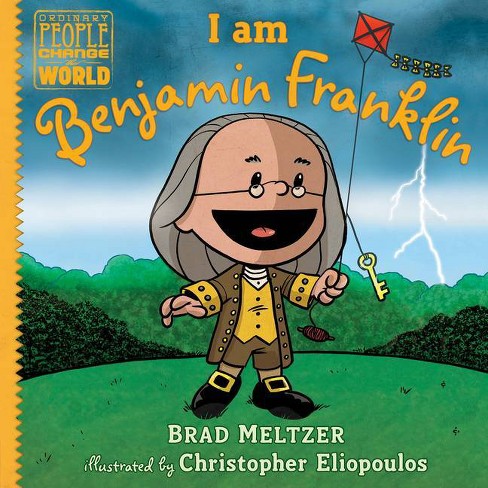 A picture book/graphic novel presentation of the life "of Benjamin Franklin, one of the Founding Fathers of the U.S. who helped draft the Declaration of Independence while making important scientific contributions"--Publisher's description.

The 21st book in the New York Times bestselling series of biographies about heroes tells the story of Benjamin Franklin, one of the Founding Fathers of the U.S. who helped draft the Declaration of Independence while making important scientific contributions. This friendly, fun biography series focuses on the traits that made our heroes great--the traits that kids can aspire to in order to live heroically themselves. Each book tells the story of an icon in a lively, conversational way that works well for the youngest nonfiction readers and that always includes the hero's childhood influences. At the back are an excellent timeline and photos.Driven by his curiosity from a young age, Benjamin Franklin's observations about the world led to key discoveries about electricity and other contributions that remain important today.

Brad Meltzer is the New York Times bestselling author of Heroes for My Son, Heroes for My Daughter, and a number of suspense novels like The Lightning Rod. He is also the host of the History Channel television shows Brad Meltzer's Decoded and Brad Meltzer's Lost History (in which he helped find the missing 9/11 flag). He lives in Florida with his wife and their three children. Christopher Eliopoulos began his illustration career at Marvel Comics, and has worked on thousands of comics, including his own Cow Boy and Franklin Richards: Son of a Genius. He is the author and illustrator of the picture books The Yawns Are Coming! and The Giggles Are Coming! and the graphic novels Cosmic Commandos and Monster Mayhem. He lives in New Jersey with his wife and their college-graduate twin sons (who also make an appearance in each Ordinary People Change the World book).
If the item details above aren’t accurate or complete, we want to know about it. Report incorrect product info.