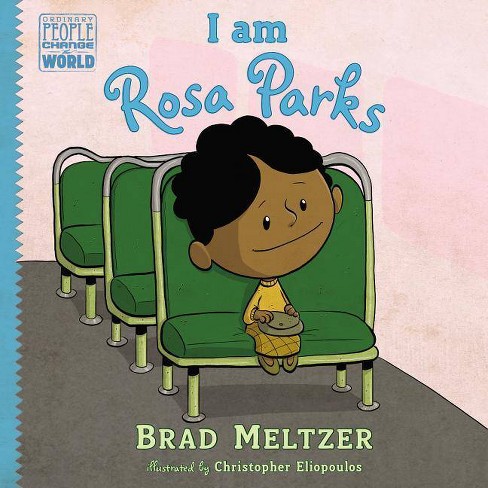 In 1955 Montgomery, Alabama, Rosa Parks dared to stand up for herself and other African Americans by refusing to give up her seat on a public bus to a white man. As a result she helped launch the country's Civil Rights Movement. Her story is told in this third entry of #1 "New York Times"-bestselling author Meltzer's biography series. Full color.

Civil Rights leader Rosa Parks is the 3rd hero in in the New York Times bestselling picture book biography series for ages 5 to 8. (Cover may vary)

Each picture book in this series is a biography of a significant historical figure, told in a simple, conversational, vivacious way, and always focusing on a character trait that made the person heroic. The heros are depicted as children throughout, telling their life stories in first-person present tense, which keeps the books playful and accessible to young children. And each book ends with a line of encouragement, a direct quote, and photos on the last page. This story focuses on Rosa Parks and how she always stood up for what's right.

This friendly, fun biography series inspired the PBS Kids TV show Xavier Riddle and the Secret Museum. One great role model at a time, these books encourage kids to dream big. Included in each book are:
- A timeline of key events in the hero's history
- Photos that bring the story more fully to life
- Comic-book-style illustrations that are irresistibly adorable
- Childhood moments that influenced the hero
- Facts that make great conversation-starters
- A virtue this person embodies: Rosa Parks's strength is highlighted in this biography. You'll want to collect each book in this dynamic, informative series!