I am George Washington (Hardcover) by Brad Meltzer, Christopher Eliopoulos 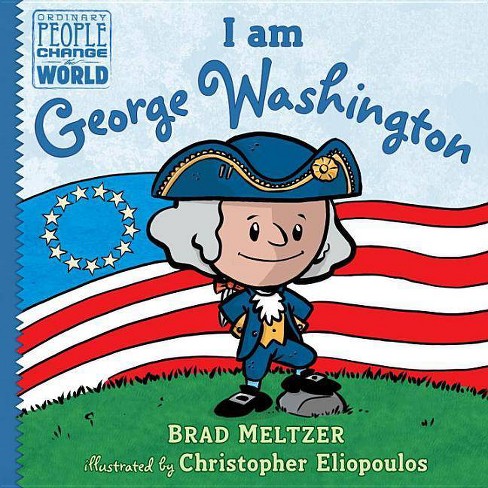 We can all be heroes. That's the inspiring message of this "New York Times" Bestselling picture book biography series from historian and author Brad Meltzer. Learn all about George Washington, America's first president.

We can all be heroes. That's the inspiring message of this New York Times Bestselling picture book biography series from historian and author Brad Meltzer. Learn all about George Washington, America's first president. George Washington was one of the greatest leaders the world has ever known. He was never afraid to be the first to try something, from exploring the woods around his childhood home to founding a brand new nation, the United States of America. With his faith in the American people and tremendous bravery, he helped win the Revolutionary War and became the country's first president. Each picture book in this series is a biography of a significant historical figure, told in a simple, conversational, vivacious way, and always focusing on a character trait that makes the person a role model for kids. The heroes are depicted as children throughout, telling their life stories in first-person present tense, which keeps the books playful and accessible to young children. And each book ends with a line of encouragement, a direct quote, photos, a timeline, and a source list.

Brad Meltzer is the New York Times Bestselling author of Heroes for My Son, Heroes for My Daughter, and a number of suspense novels for adults. He is also the host of the History Channel television shows Brad Meltzer's Decoded and Lost History. He lives in Florida with his wife and their three children. Christopher Eliopoulos began his illustration career as a letterer for Marvel, and has worked on thousands of comics, including Franklin Richards: Son of a Genius, Pet Avengers, and Cow Boy, all of which he wrote and illustrated. He lives in New Jersey with his wife and their identical twin sons.
If the item details above aren’t accurate or complete, we want to know about it. Report incorrect product info.