I Am Albert Einstein (Hardcover) by Brad Meltzer 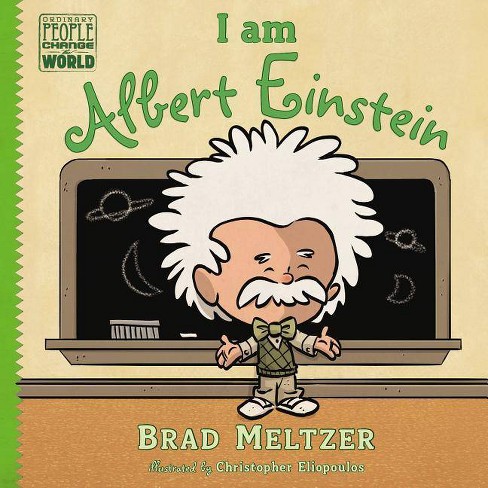 We can all be heroes. That's the inspiring message of this New York Times Bestselling picture book biography series from historian and author Brad Meltzer. Even when he was a kid, Albert Einstein did things his own way. He thought in pictures instead of words, and his special way of thinking helped him understand big ideas like the structure of music and why a compass always points north. Those ideas made him want to keep figuring out the secrets of the universe. Other people thought he was just a dreamer, but because of his curiosity, Einstein grew up to be one of the greatest scientists the world has ever known. What makes a hero? This lively, fun biography series by best-selling author Brad Meltzer answers the question, one great role model at a time.

Brad Meltzer is the New York Times Bestselling author of Heroes for My Son, Heroes for My Daughter, and a number of suspense novels for adults. He is also the host of the History Channel television show Brad Meltzer's Decoded. He lives in Florida with his wife and their three children. Christopher Eliopoulos began his illustration career as a letterer for Marvel, and has worked on thousands of comics, including Franklin Richards: Son of a Genius, Pet Avengers, and Cow Boy, all of which he wrote and illustrated. He lives in New Jersey with his wife and their identical twin sons.
If the item details above aren’t accurate or complete, we want to know about it. Report incorrect product info.