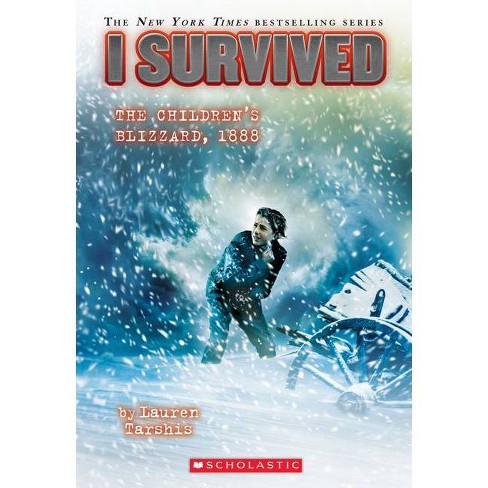 The Schoolhouse Blizzard, also known as the Children's Blizzard or the Great Blizzard of 1888, caught people completely by surprise and resulted in 235 fatalities, including several children in one-room schoolhouses. Tarshis places a resilient 11-year-old character in the midst of this deadly blizzard, fighting their way out.

Bestselling author Lauren Tarshis tackles the Children's Blizzard of 1888 in this latest installment of the groundbreaking, New York Times bestselling I Survived series.Eleven-year-old John Hale has already survived one brutal Dakota winter, and now he's about to experience one of the deadliest blizzards in American history. The storm of 1888 was a monster, a frozen hurricane that slammed into America's midwest without warning. Within hours, America's prairie would be buried under ten feet of snow. Hundreds would be dead, thousands terrified and lost and freezing. John never wanted to move to the wide-open prairie. He's a city kid, not a tough pioneer! But his inner strength is seriously tested when he finds himself trapped in the blinding snow, the wind like a giant crushing hammer, pounding him over and over again. Will John ever find his way home?

Lauren Tarshis's New York Times bestselling I Survived series tells stories of young people and their resilience and strength in the midst of unimaginable disasters and times of turmoil. Lauren has brought her signature warmth and exhaustive research to topics such as the battle of D-Day, the American Revolution, Hurricane Katrina, the bombing of Pearl Harbor, and other world events. She lives in Connecticut with her family, and can be found online at laurentarshis.com.
If the item details above aren’t accurate or complete, we want to know about it.

Paws: Gabby Gets It Together - by Nathan Fairbairn

Never After: The Thirteenth Fairy - (Chronicles of Never After, 1) by Melissa de la Cruz (Hardcover)

I Am Malala - by Malala Yousafzai

5 out of 5 stars
Would recommend
rose - 4 years ago, Verified purchaser
My son loves the entire series.
Did you find this review helpful?

5 out of 5 stars
Would recommend
Bridgette Stevens - 4 years ago, Verified purchaser
fast shipping well packaged great book!
Did you find this review helpful?

5 out of 5 stars
Would recommend
SarahB - 5 years ago, Verified purchaser
My 9 year old son loves the I Survived books. This is the newest one and he read it in one day. He loved it!
1 guest found this review helpful. Did you?