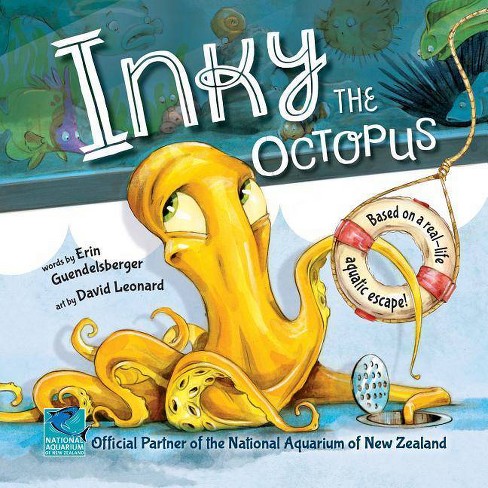 Based on a true story, this picture book chronicles the adventure that the real-life Inky might have taken in the open ocean following his escape from the National Aquarium of New Zealand. Full color.

Published in partnership with the National Aquarium of New Zealand, Inky the Octopus is based on a real-life aquatic escape! The best octopus book for kids looking to learn more about aquatic animals and aquariums.

Follow Inky the octopus as he escapes from the National Aquarium of New Zealand to the ocean! Based on a true story, Inky the Octopus: Bound for Glory chronicles the adventure that the real-life Inky might have taken on his escape to freedom in the open ocean!

BONUS: backmatter includes the real-life stories of Inky and other daring octopuses, as well as fascinating facts about these masters of disguise!

"Inky is a great companion for family trips to the beach or aquarium. In jaunty rhyming verse, Inky relays his tale, which is based on the true story of an octopus that escaped from the National Aquarium in New Zealand in 2016. Inky lives in a "world of see-through walls" and dines like a king on lobster, shrimp and squid, but he yearns to be free in the open sea. The intrepid marine creature squeezes, schemes and slips from his tank and through a tiny drain hole to drop to the ocean below, where he exuberantly exclaims, "I'll follow my heart wherever it leads. I'll travel far and wide." The back matter includes fascinating facts about octopi and brief stories about other eight-tentacle wonders." - Washington Parent

"An imagined adventure inspired by real-life escape-artist octopodes... The colors and shapes used to depict the marine life create a great deal of personality and visual interest for the background of the illustrations. Portrayals of Inky's life in the aquarium make more use of white space while the world outside incorporates more color, with the final pages depicting the open ocean and coral reef proving the most colorful of all. " - School Library Journal
If the item details above aren’t accurate or complete, we want to know about it. Report incorrect product info.