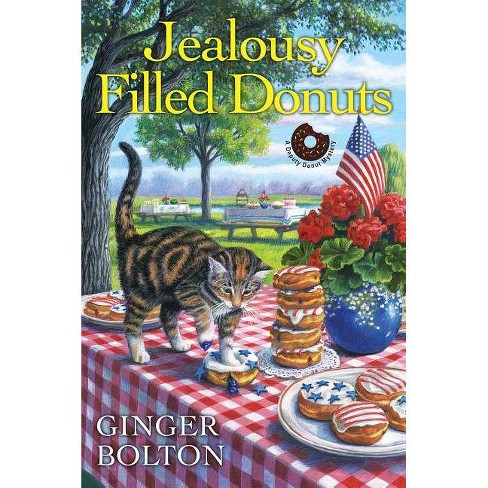 When a firecracker becomes a murder weapon, Emily Westhill pursues a killer with a short fuse in the third installment of this series.

When a firecracker becomes a murder weapon, Emily Westhill pursues a killer with a short fuse ...

It is a truth universally acknowledged--cops and donuts go together. Exhibit A: Deputy Donut Café, owned and operated by detective's widow Emily Westhill and her father-in-law, the retired police chief of Fallingbrook, Wisconsin. Named after Emily's adored and adorable tabby, the donut shop is a favorite among cops, firemen, and EMTs, as well as tourists and townspeople. So when Fallingbrook needs donuts for their Fourth of July picnic, Emily's shop gets deputized. But a twisted killer has found another use for Emily's treats. At the picnic, a firecracker is hidden in a stack of raspberry-filled donuts and aimed at the unwitting queen of the festivities. When it explodes, she is killed. Having her jelly donuts involved puts Emily in a sticky situation, and when a shady shutterbug tries to frame her with incriminating photos, she finds herself in quite a jam. To preserve her freedom and her shop's reputation, Emily needs to solve this case--before the fuse-lighting felon goes off again ... Praise for Goodbye Cruller World "Food scenes tantalize with description of single-origin coffee as well as classic and trendy donuts--solid recipes included."
--Publishers Weekly

Ginger Bolton is the pseudonym of an Agatha-nominated cozy mystery author. She is the author of Survival of the Fritters and Goodbye Cruller World in the Deputy Donut Mystery series, and is very fond of donuts, coffee, and coffee shops that encourage patrons to linger and chat. Ginger lives in a rural area surrounded by cozy villages. When she isn't reading, writing, or daydreaming while gazing out windows, she walks her dogs, plays an electric piano (she uses earphones so as not to frighten the wildlife), creates minor disasters in her kitchen, and, very occasionally, takes part in local amateur theater productions, which, intended or not, become comedies.
If the item details above aren’t accurate or complete, we want to know about it.