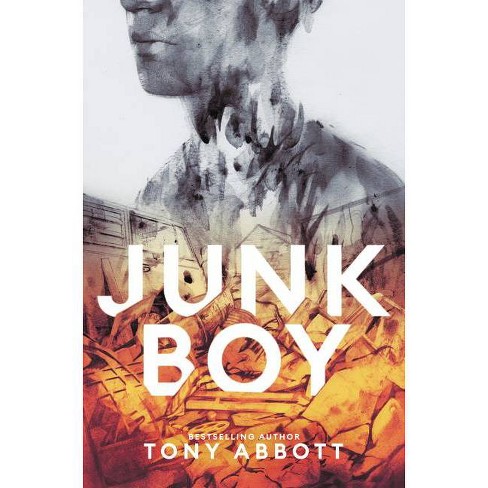 "Bobby, who is bullied by the kids at school for living in a home with a front yard that is filled with garbage, meets a young artist who teaches him to see himself as more than "Junk Boy.""--

Bestselling author Tony Abbott's YA novel-in-verse is an unflinching and heartbreaking look at a boy's junk-filled life, and the ways he finds redemption and hope, perfect for fans of The Crossover and Long Way Down.

Junk. That's what the kids at school call Bobby Lang, mostly because his rundown house looks like a junkyard, but also because they want to put him down. Trying desperately to live under the radar at school--and at the home he shares with his angry, neglectful father--Bobby develops a sort of proud loneliness. The only buffer between him and the uncaring world is his love of the long, wooded trail between school and home.

Life grinds along quietly and hopelessly for Bobby until he meets Rachel. Rachel is an artist who sees him in a way no one ever has. Maybe it's because she has her own kind of junk, and a parent who hates what Rachel is: gay. Together the two embark on journeys to clean up the messes that fill their lives, searching against all odds for hope and redemption.

Narrated in Bobby's unique voice in arresting free verse, this novel will captivate readers right from its opening lines, urging them on page after page, all the way to its explosive conclusion.

Bobby narrates in largely unrhymed verse with clipped lines and a propulsive cadence that befits its speaker. There's light and redemption at the end that's hard earned for all players--adult and teen.--Bulletin of the Center for Children's Books

Writing in spare, straightforward verse, Abbott deftly captures the characters' hurt at feeling forgotten and misunderstood, the isolation of coming-of-age under traumatic circumstances, and the solace of being seen and accepted. Graceful in execution and in substance, Bobby and Rachel's moving story is emotionally satisfying.--Publishers Weekly


This poignant novel in verse captures the bleakness and frustration of both teens' lives and draws them out of their despair with courage and compassion. The . . . conclusion is both hopeful and a relief.--Booklist

Seasoned YA author Abbott crafts a nuanced story about an unlikely but desperately needed friendship between two outsiders. Readers will be pushed to think critically about how words and actions affect others. The narrative also respectfully shows positive aspects of religion and getting mental health assistance. This novel-in-verse has an engaging male POV, and would be a good read-alike for those who enjoyed Jason Reynolds's Long Way Down. The message of breaking through barriers to reach out for help and being an empathetic friend are important themes for teens to understand, and makes this a definite buy for YA collections.--School Library Journal

The free-verse form effectively propels this story, which is at once action-oriented and introspective, forward. Bobby's emotion-filled thoughts make him a narrator it is easy to feel sympathy toward. The idea that people can help others even as they contend with their own demons is clear. This message, and the easily accessible, evocative language of the verse, should hold appeal for a range of realistic fiction fans.--Kirkus Reviews