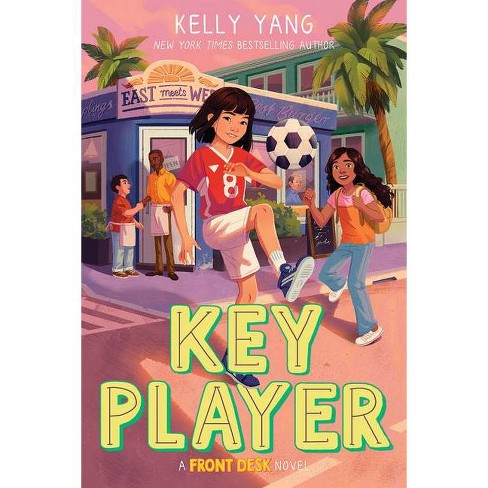 The Women's World Cup coming to Southern California, everyone is soccer-crazy -- especially Mia Tang! The U.S. is playing China in the finals, and Mia feels like her two identities are finally coming together. Less exciting, though? The fact that her P.E. teacher wants Mia to get out of the soccer field, too -- or fall short of the grade she needs to earn a spot at journalism camp. But as always, Mia Tang is ready with a plan: she'll track down the two women's teams, interview them, and write an A-grade article for P.E. instead!

It's not so easy, though, finding professional athletes in Pasadena -- or bringing two identities together, even during a game. As Mia aims for her goals, she'll have to face prejudice, discrimination, and her own fears. But if anyone can find a way to win, it's Mia Tang!

Praise for Room to Dream:

* Fans of this series that keeps going strong will devour this latest entry. -- Kirkus, starred review

Awards and Praise for Front Desk:

NPR Best Books of the Year

Amazon Best Books of the Year

Bookpage Best Books of the Year

* Powerful -- Bulletin for the Center of Children's Books, starred review

Kelly Yang is the #1 New York Times bestselling author of several books for young readers, including Three Keys, Room to Dream, Key Player, and the 2019 Asian/Pacific American Award for Literature winner Front Desk, which was also chosen a Best Book of the Year by multiple publications, including NPR, the Washington Post, and the New York Public Library. Kelly's family immigrated to the United States from China when she was a young girl, and she grew up in California, in circumstances very similar to those of Mia Tang. After attending college at the age of 13, she graduated UC Berkeley and Harvard Law School. She is the founder of The Kelly Yang Project, a leading writing and debating program for children in Asia and the United States. Her writing has been published in the South China Morning Post, the New York Times, the Washington Post, and the Atlantic. To learn more about Kelly and the Front Desk series, visit frontdeskthebook.com.
If the item details above aren’t accurate or complete, we want to know about it. Report incorrect product info.