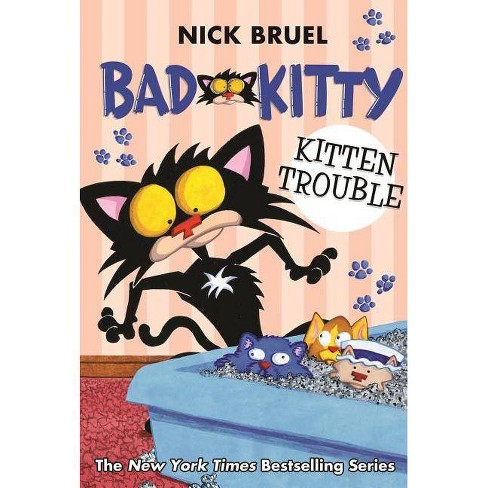 Bad Kitty has a visit from some young feline frenemies in this 12th hilarious and poignant installment of the "New York Times"-bestselling series. Illustrations.

There's terrible news in the neighborhood next to Kitty's!

A conflict there is growing worse and worse. It started as an argument and has now turned into a full-fledged fight. Worst of all: The cat shelter has been destroyed.

Kitty's family decides it's time to do something to help. They have an idea to foster as many displaced kittens as possible.

Will our favorite bad-tempered friend learn to share her space, her food, and **GASP!** her toys?

Find out in Kitten Trouble, this hilarious and poignant addition to the Bad Kitty series from bestselling author and illustrator Nick Bruel.

Nick Bruel is the author and illustrator of the phenomenally successful Bad Kitty series, including the 2012 and 2013 CBC Children's Choice Book Award winners Bad Kitty Meets the Baby and Bad Kitty for President. He has also written and illustrated popular picture books including Who is Melvin Bubble?, Bob and Otto and A Wonderful Year. Nick lives with his wife and daughter in Westchester, New York.
If the item details above aren’t accurate or complete, we want to know about it. Report incorrect product info.