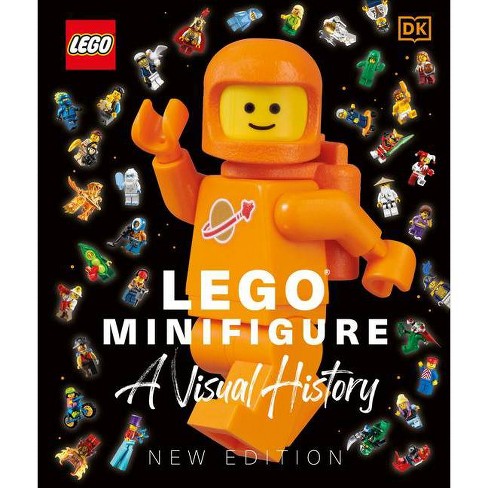 "The ultimate visual history, packed with fantastic photographs and profiles of more than 2,000 minifigures and other LEGO characters ... facts and statistics about villains and heroes ... and much, much more."--Page 4 of cover.

*The Library Edition does not include the LEGO(R) Minifigure. Celebrate the epic journey of the LEGO(R) minifigure.

Enter the world of minifigures with this fully updated edition. The first minifigure was created in 1978, and today the entire minifigure population could circle the globe more than five times! Starring more than 2,000 of the most popular and rarest minifigures from the LEGO(R) Minifigure Series and themes including LEGO(R) NINJAGO(R), THE LEGO(R) MOVIE(TM), LEGO(R) Star Wars(TM), LEGO(R) City, LEGO(R) Harry Potter(TM), and many more. From astronauts and vampires to Super Heroes and movie characters, feast your eyes on the most awesome minifigures of every decade! (c)2020 The LEGO Group.

Gregory Farshtey is an American writer, whose work includes numerous contributions to the LEGO worlds of Bionicle, in the form of comics and graphic novels, and Ninjago, through his New York Times bestselling graphic novel series. With more than 80 books under his belt, he is a writer and editor for Lego Club Magazine and Lego Club Jr. Magazine, and the coauthor, with Daniel Lipkowitz, of LEGO Minifgure Year by Year: A Visual History. Daniel Lipkowitz is a senior writer and story developer at the LEGO Group. His writing has appeared in LEGO Club Magazine as well as LEGO Master Builder Academy, and his characters and storylines regularly appear in new LEGO themes and animated LEGO films. He is the author of The LEGO Ideas Book, LEGO Awesome ideas, and Lego Play Book: Ideas to Bring Your Bricks to Life. Simon Hugo is a former senior editor of the official Star Trek Magazine and other film and TV tie-in titles, including Star Wars Insider and Torchwood: The Official Magazine. He has written for Doctor Who Adventures and Doctor Who Monster Invasion, and also authored Marvel's Spider-Man: Adventures of the Web-Slinger, published by DK.
If the item details above aren’t accurate or complete, we want to know about it. Report incorrect product info.