Life She Was Given - by Ellen Marie Wiseman (Paperback) 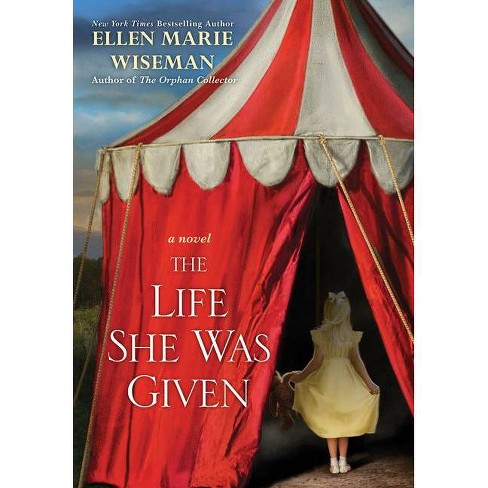 "In 1931, Lilly Blackwood was sold to the circus. More than two decades later, nineteen-year-old Julia Blackwood inherits her parents' estate and returns home hoping to erase painful memories of strict rules and forbidden rooms. Instead, she becomes immersed in a mystery involving a hidden attic room and circus photos featuring a striking young girl"--

"A powerful, poignant novel."
--In Touch, Grade A

From the internationally bestselling author of The Orphan Collector comes a beautifully written and moving tale of family secrets and the importance of a mother's love--and how it can shape a life--even in the most shocking ways. A painful saga of strength and reinvention perfect for fans of Jojo Moyes and Lisa Wingate--set in two different times, as two young women come of age and uncover the mysteries of their families, and find their own ways in the world... On a summer evening in 1931, Lilly Blackwood glimpses circus lights from the grimy window of her attic bedroom. Lilly isn't allowed to explore the meadows around Blackwood Manor. She's never even ventured beyond her narrow room. Momma insists it's for Lilly's own protection, that people would be afraid if they saw her. But on this unforgettable night, Lilly is taken outside for the first time--and sold to the circus sideshow. More than two decades later, nineteen-year-old Julia Blackwood has inherited her parents' estate and horse farm. For Julia, home was an unhappy place full of strict rules and forbidden rooms, and she hopes that returning might erase those painful memories. Instead, she becomes immersed in a mystery involving a hidden attic room and photos of circus scenes featuring a striking young girl. At first, The Barlow Brothers' Circus is just another prison for Lilly. But in this rag-tag, sometimes brutal world, Lilly discovers strength, friendship, and a rare affinity for animals. Soon, thanks to elephants Pepper and JoJo and their handler, Cole, Lilly is no longer a sideshow spectacle but the circus's biggest attraction...until tragedy and cruelty collide. It will fall to Julia to learn the truth about Lilly's fate and her family's shocking betrayal, and find a way to make Blackwood Manor into a place of healing at last. Moving between Julia and Lilly's stories, Ellen Marie Wiseman portrays two extraordinary, very different women in a novel that, while tender and heartbreaking, offers moments of joy and indomitable hope. "Perfect for book clubs and readers who admired Sara Gruen's Like Water for Elephants."
--Library Journal, STARRED REVIEW "A vibrant maze of desires."
--ForeWord Reviews "Seamlessly blends mystery and history with compelling and well-researched details."
--The Historical Novels Review

"Vividly drawn and complex...Fans of Karen White and Sara Gruen will be drawn in by the drama and mystery of Wiseman's novel."
--BookPage

"A can't-put-it-down novel of family secrets involving two young girls who only seek to be loved. Perfect for book clubs and readers who admired Sara Gruen's Like Water for Elephants."
--Library Journal, STARRED REVIEW "A vibrant maze of desires. The sharp divide between expectations and painful truths, mothers and daughters, past and present, culminate in a sensational finale."
--ForeWord Reviews "Wiseman has created two equally compelling story lines that gradually reveal the commonalities between them. This well-crafted novel provides rewards throughout."
--Publishers Weekly "Ellen Marie Wiseman is noted for capturing little known pockets of American life and depicting them with heart and insight; her latest novel may be her most harrowing yet . . . The author's in-depth knowledge of traveling circuses and "freak shows" of the era is evident. The novel seamlessly blends mystery and history with compelling and well-researched details. The two women in the book, though separated by time, demonstrate resilience in the face of despair. Thematic elements include religious extremism; the many forms of love; and strength under adverse circumstances."
--The Historical Novels Review

"Wiseman excels at creating an atmosphere . . . Her characters are all vividly drawn and complex, especially Lilly's abusive mother, Coralline. But at the heart of Wiseman's tale of loss and redemption are Lilly and Julia, connected in spirit by their determination to overcome years of pain and sorrow. Fans of Karen White and Sara Gruen will be drawn in by the drama and mystery of Wiseman's novel." --BookPage

Ellen Marie Wiseman is the New York Times bestselling author of highly acclaimed historical fiction novels The Orphan Collector, What She Left Behind, The Plum Tree, Coal River and The Life She Was Given, which was a Great Group Reads selection of the Women's National Book Association and National Reading Group Month. Born and raised in Three Mile Bay, a tiny hamlet in Northern New York, she's a first-generation German American who discovered her love of reading and writing while attending first grade in one of the last one-room schoolhouses in New York State. Since then, her novels have been translated into eighteen languages and published worldwide. A mother of two, Ellen lives on the shores of Lake Ontario with her husband and dogs. She can be found online at: EllenMarieWiseman.com
If the item details above aren’t accurate or complete, we want to know about it. Report incorrect product info.