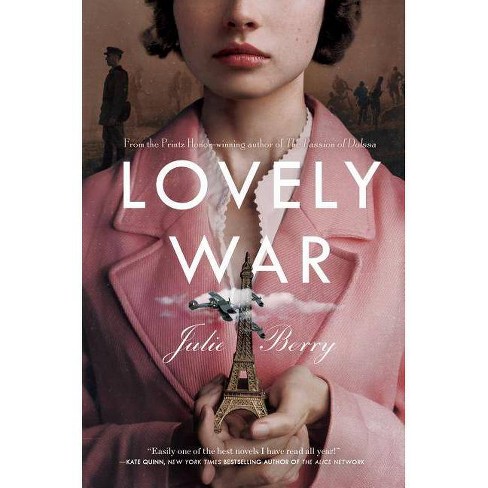 The Printz Honor-winning author of "The Passion of Dolssa" delivers a sweeping, multi-layered romance, set in the perilous days of World Wars I and II. "An effervescent confection of a novel filled with humor, tragedy, romance, and myth."--Kate Quinn, "New York Times"-bestselling author of "The Alice Network." 1/4.

Read the novel New York Times bestselling author of The Alice Network Kate Quinn called easily one of the best novels I have read all year! A critically acclaimed, multi-layered romance set in the perilous days of World Wars I and II, where gods hold the fates--and the hearts--of four mortals in their hands. They are Hazel, James, Aubrey, and Colette. A classical pianist from London, a British would-be architect-turned-soldier, a Harlem-born ragtime genius in the U.S. Army, and a Belgian orphan with a gorgeous voice and a devastating past. Their story, as told by goddess Aphrodite, who must spin the tale or face judgment on Mount Olympus, is filled with hope and heartbreak, prejudice and passion, and reveals that, though War is a formidable force, it's no match for the transcendent power of Love. Hailed by critics, Lovely War has received seven starred reviews and is an indie bestseller. Author Julie Berry has been called a modern master of historical fiction by Bookpage and a celestially inspired storyteller by the New York Times, and Lovely War is truly her masterwork.

Julie Berry pens an utter delight in Lovely War, an effervescent confection of a novel filled with humor, tragedy, romance, and myth. Easily one of the best novels I have read all year! --Kate Quinn, New York Times bestselling author of The Alice Network

This fascinating, gorgeously written novel of World War I will grip you and remind you that the greatest danger is closing our hearts to love. --Nancy Werlin, National Book Award honoree and New York Times bestseller "Julie Berry writes the past as if she lived it." --Jennifer Donnelly, New York Times bestselling author ★ "Scheherazade has nothing on Berry . . . An unforgettable romance so Olympian in scope, human at its core, and lyrical in its prose that it must be divinely inspired." --Kirkus Reviews, starred review ★ Berry's evocative novel . . . gains steam as the stories flesh out. Along the way, it suggests that while war and its devastation cycles through history, the forces of art and love remain steady, eternal, and life-sustaining. --Publishers Weekly, starred review ★ "Poignant...will make readers, by turns, laugh, cry, and swoon." --The Horn Book, starred review ★ "Proves again that Berry is one of our most ambitious writers. Happily for us, that ambition so often results in great success." --Booklist, starred review

★ Julie Berry [is] a modern master of historical fiction for young readers. . . Berry's superb research and attention to detail are perfectly suited to the layers of this story of love in wartime . . . [a] romantic yet unflinching look at teenagers coming of age during World War I. --Bookpage, starred review ★ This poignant novel will make readers, by turns, laugh, cry, and swoon. --The Horn Book, starred review ★ Readers will be swept away by Berry's lyrical prose. --School Library Journal, starred review When the hurly-burly's done, and the battle's lost and won, does Love conquer War? The answer is never in doubt, but it's a pleasure to have it confirmed by a celestially inspired storyteller. --The New York Times Book Review Leavened by wit and informed by history, Lovely War is a romantic and inventive story from its dramatic start to its laughter- and tear-spangled ending. --The Wall Street Journal Stunning . . . gives ordinary lives the sheen of the epic. --Refinery29 [A] triumphant piece of historically focused fiction. . . a moving, brutal, and yes, lovely, story of the ways in which people find hope in a world gone mad --BCCB Reviews Berry's accomplished talent for developing all elements of plot--character, tone, and mood--in addition to her fresh writing style makes this title a compelling page turner. --School Library Connection

Julie Berry is the author of the 2017 Printz Honor and Los Angeles Times Book Prize shortlisted novel The Passion of Dolssa, the Carnegie and Edgar shortlisted All the Truth That's in Me, and many other acclaimed middle grade novels and picture books. She holds a BS from Rensselaer in communication and an MFA from Vermont College. She lives in Southern California with her family.
If the item details above aren’t accurate or complete, we want to know about it.

The Hate U Give - by Angie Thomas

The Kiss of Deception - (Remnant Chronicles) by Mary E Pearson

Watch Over Me - by Mila Gray

A Thousand Pieces of You - (Firebird) by Claudia Gray (Hardcover)

The Summer of Broken Rules - by K L Walther (Paperback)

Year on Fire - by Julie Buxbaum

The Night I Disappeared - by Julie Reece Deaver (Paperback)

Song of the Crimson Flower - by Julie C Dao (Hardcover)