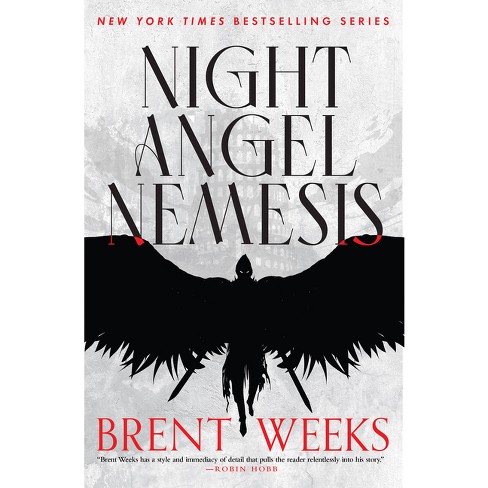 Return to the New York Times bestselling world of the Night Angel, where master assassin Kylar embarks on a new adventure as the High King Logan Gyre calls on him to save his kingdom and the hope of peace.

After the war that cost him so much, Kylar Stern is broken and alone. He's determined not to kill again, but an impending amnesty will pardon the one murderer he can't let walk free. He promises himself this is the last time. One last hit to tie up the loose ends of his old, lost life. But Kylar's best--and maybe only--friend, the High King Logan Gyre, needs him. To protect a fragile peace, Logan's new kingdom, and the king's twin sons, he needs Kylar to secure a powerful magical artifact that was unearthed during the war. With rumors that a ka'kari may be found, adversaries both old and new are on the hunt. And if Kylar has learned anything, it's that ancient magics are better left in the hands of those he can trust. If he does the job right, he won't need to kill at all. This isn't an assassination--it's a heist. But some jobs are too hard for an easy conscience, and some enemies are so powerful the only answer lies in the shadows.
For more from Brent Weeks, check out: The Ka'kari Codex The Night Angel Trilogy
The Way of Shadows
Shadow's Edge
Beyond the Shadows The Kylar Chronicles
Night Angel Nemesis The Night Angel Trilogy: 10th Anniversary EditionNight Angel: The Complete Trilogy (omnibus) Perfect Shadow: A Night Angel Novella
The Way of Shadows: The Graphic Novel Lightbringer
The Black Prism
The Blinding Knife
The Broken Eye
The Blood Mirror
The Burning White

"Brent Weeks has a style and immediacy of detail that pulls the reader relentlessly into his story. He doesn't allow you to look away."--Robin Hobb on The Black Prism

"Brent Weeks is so good it's starting to tick me off."--Peter V. Brett, New York Times bestselling author of The Desert Spear on The Night Angel Trilogy

"Packed with all of the rich characterization, political intrigue, frenetic action, and clever color-based magic a fantasy lover could ask for, it may even be the best of the lot."--B&N Reads: Best of the Year on The Burning White

"Weeks manages to ring new tunes on...old bells, letting a deep background slowly reveal its secrets and presenting his characters in a realistically flawed and human way."--Publishers Weekly on The Black Prism

"Nobody does breakneck pacing and amazingly executed plot twists like Brent Weeks."--Brian McClellan, author of Promise of Blood on The Black Prism

Brent Weeks was born and raised in Montana. He wrote on bar napkins and lesson plans before landing his dream job years and thousands of pages later. Brent lives in Oregon with his wife, Kristi, and their daughters. Find out more about the author at www.brentweeks.com or on twitter @brentweeks.
If the item details above aren’t accurate or complete, we want to know about it.

In the Lives of Puppets - by Tj Klune (Hardcover)

I Will Find You - by Harlan Coben (Hardcover)

Beyond the Shadows - (Night Angel Trilogy) by Brent Weeks (Paperback)