One Day It'll All Make Sense - by Common (Paperback) 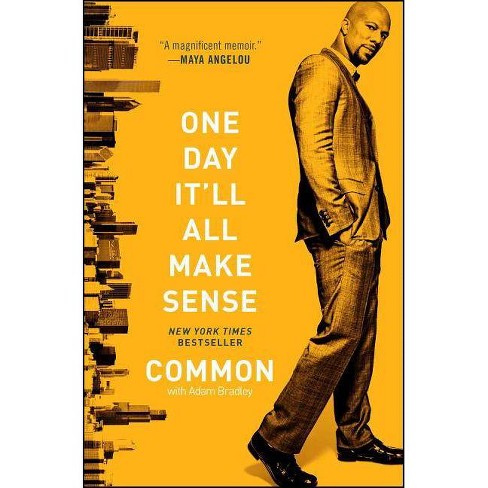 From the hip hop icon and Hollywood star, a candid, "New York Times"-bestselling memoir ranging from his childhood on Chicago's South side and his emergence as one of rap's biggest names.

From the hip hop icon, Hollywood star, and "a true artist and writer of deep talent" (James McBride, author of The Color of Water)--a candid, New York Times bestselling memoir ranging from his childhood on Chicago's South side and his emergence as one of rap's biggest names. Common has earned a reputation in the hip-hop world as a conscious artist by embracing themes of love and struggle in his songs. His journey toward understanding is rooted in his relationship with a remarkable woman, his mother. Common holds nothing back in this gripping memoir, both provocative and funny. He tells what it was like for a boy with big dreams growing up on the South Side of Chicago. He reveals how he almost quit rapping after his first album sold only two thousand copies. He recounts his rise to stardom and talks about the challenges of balancing fame, love, and family. Through it all, Common emerges as a man in full. Rapper. Actor. Activist. But also father, son, and friend. His story offers a living example of how, no matter what you've gone through, one day it'll all make sense.

"A powerful memoir that speaks to all audiences." -Queen Latifah

"A thoughtful and beautiful book that tells us much more about Common... His mother's perspective takes this to another level." -Toure, author of "Who's Afraid of Post-Blackness"

"Common has written a magnificent memoir. It states that it is a book about his fascinating life. That is true. More importantly, his story is the story of all young people trying to grow up. His saga reminds the reader that love liberates and poverty cripples. Common writes beautifully, like the poet he is."

"Common is a 360-degree human being, and I don't say that about many people. He never needed to "pimp the hood" to achieve his deserved success. He is an eloquent and honorable role model and his memoir is a perfect example of his depth as a human being. In addition, reading about his childhood and upbringing in Chicago is really a trip - because we went through so many of the same experiences albeit decades apart. Chicago is still the roughest and primary "Institution of Hard Knocks," and if you can make it there, you can truly make it anywhere!" -Quincy Jones

"Raw in its honesty, profound in its insights, "One Day It'll All Make Sense "establishes Common as a voice that is as compelling on the page as it is on a record. This is not simply the story of an individual artist but a crucial page the history of hip hop itself." -Jelani Cobb, author of "The Substance of Hope"

Common distinguishes himself here as a true artist and a writer of deep talent. This book is the story of an artist in constant evolution, one who embodies the strength of the brilliant woman that raised him, the love of the Southside Chicago land that spawned him, and the raw spirit of the pro basketball player who fathered him. I've always heard that the people of Southside Chicago were special. I'm glad their native son Common shows us why. --James McBride Author of "The Color of Water"

Common was born Lonnie Rashid Lynn in Chicago March 13, 1972. Best known as a star recording artist and actor, he has also independently published children's books. He has a daughter Omoye Assata Lynn, born in 1997.
Adam Bradley is the author of Book of Rhymes: The Poetics of Hip Hop and the co-editor of Ralph Ellison's Three Days Before the Shooting..., and Yale Anthology of Rap. He lives in Boulder with his wife.
If the item details above aren’t accurate or complete, we want to know about it. Report incorrect product info.