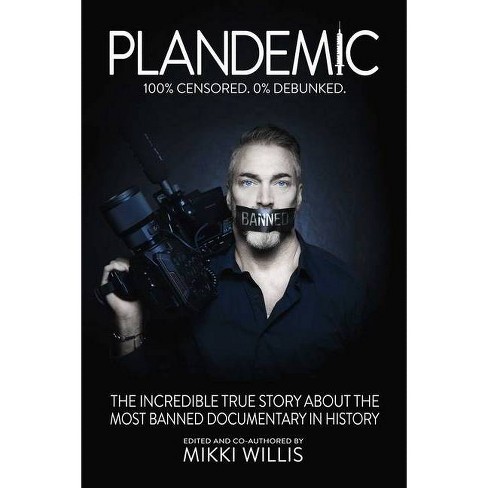 The incredible true story of the most banned documentary in history. Researching the controversy arising after the release of the viral phenomenon known as Plandemic, the most seen and censored documentary in history, an investigative journalist sets out to disprove and debunk claims made throughout the film. Instead, the journalist opens a Pandora's box to witness firsthand an underworld of corruption, lies, and the darkest of unsolved mysteries. The result? A fascinating behind-the-scenes account about the making of Plandemic and Plandemic: Indoctornation; an exposé of the truth behind the origins of COVID-19; an alarming examination of individuals, such as Dr. Anthony Fauci and Bill Gates, and organizations like the CDC, NIH, WHO, and Bill & Melinda Gates Foundation, among others, driving the global vaccination agenda; and a look at the tech giant and mainstream media forces doing their utmost to silence and suppress the veracity of these findings. Investigative filmmaker Mikki Willis focuses his unflinching lens on two key subjects: virologist Dr. Judy Mikovits, who speaks frankly about the machinations for control and profit corrupting individuals and institutions tasked with overseeing public health; and Dr. David E. Martin, whose research and shocking data corroborate allegations of conflicts of interest. The US media and fact checkers condemned the two documentaries as "dangerous conspiracy theory." Today, the two-part bombshell is being hailed globally for warning the world of the crimes against humanity that are just now being uncovered. From the death of his brother and mother due to bad medicine, to his awakening at Ground Zero on 9/11, Mikki Willis describes in detail the incredible life experiences that led him to risk his career and safety to create the Plandemic series.

"Mikki Willis is the Paul Revere of the rebellion against the burgeoning totalitarianism of the Biosecurity State. Willis' incendiary film, Plandemic, sparked the seeds of revolution in a billion open minds and ignited the dangerous global conflagration of critical thinking."
--Robert F. Kennedy Jr., founder, Children's Health Defense "Mikki Willis is a visionary who saw what was happening in our world before almost everyone else and has managed to explain it beautifully in film and print. Read this book to understand the world you live in!"
--Dr. Meryl Nass, biological warfare epidemiologist "Plandemic is a brilliant documentary and book that has trailblazed the revelation of the truth to humanity."
--Vladimir Zev Zelenko, MD "In the future the world will likely be divided into two groups: those who knew it was a Plandemic and those who believed The Lie. To be sure, no one will report that ignorance was bliss."
--Del Bigtree, host, TheHighWire.com "Mikki Willis is a courageous journalist who exemplifies what good men are capable of when standing for principles and the truth."
--Lara Logan, award winning investigative journalist "In the history of journalism there has never been a documentary or book more important for the moment and more feared by the establishment."
--Ben Swann, award winning investigative journalist "Mikki's commitment to uncovering truth overrides any of his partisan beliefs. He's brilliantly compiled a captivating must-read to explain the censorship and tyranny that ensued once the pandemic began."
--Dr. Joseph Mercola, founder, Mercola.com

Mikki Willis, is a father and independent investigative filmmaker. After digging for survivors under the rubble of the World Trade Center in 2001, Willis experienced an awakening that reshaped his life and profession. Since then, his productions have been used to correct divisive narratives about historic events, and as key evidence in major international court cases. His most recent production, PLANDEMIC, is the most seen and censored documentary series of all time.
If the item details above aren’t accurate or complete, we want to know about it. Report incorrect product info.

Get it by Tue, Oct 19 with Express Shipping
Get it by from Wed, Oct 20 - Mon, Oct 25 with free Standard Shipping