Play Poker Like the Pros - by Phil Hellmuth (Paperback) 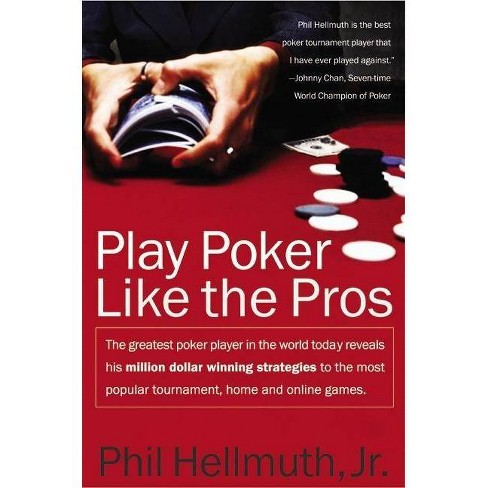 A poker master presents the perfect introduction to the world of poker including Texas Hold 'em, Omaha, Seven-Card Stud, and Razz. Includes special chapters for advanced players on how to beat online games and an inside look at tournament play. 19 line drawings. 1 halftone.

In Play Poker Like the Pros, poker master Phil Hellmuth, Jr., demonstrates exactly how to play and win -- even if you have never picked up a deck of cards -- the modern games of poker, including: Texas Hold'em, Omaha, Seven-Card Stud, and Razz.

Phil Hellmuth, Jr., a seven-time World Champion of Poker, presents his tournament-tested strategies to beat any type of player, including:

Play Poker Like the Pros begins by laying out the rules and set-up of each game and then moves on to easy-to-follow basic and advanced strategies. Hellmuth teaches exactly which hands to play, when to bluff, when to raise, and when to fold. In addition Hellmuth provides techniques for reading other players and staying cool under pressure. There are also special chapters on how to beat online poker games and an inside look at tournament play.

"From the moment I first played poker with Phil I knew that I was witnessing something special."--Doyle Texas Dolly Brunson, Poker legend and eight-time World Champion of poker

"Play Poker Like the Pros is the best poker strategy book ever written.--Amarillo Slim Preston, Hall of Fame inductee and poker's greatest ambassador.

"Phil Hellmuth gave me the best poker lesson I've ever received."--Matt Damon, actor and co-star in the movie Rounders

"Phil Hellmuth is the best poker tournament player that I have ever played against."--Johnny Chan, Seven-time World Champion of Poker
If the item details above aren’t accurate or complete, we want to know about it. Report incorrect product info.