Poe for Your Problems - by Catherine Baab-Muguira (Hardcover) 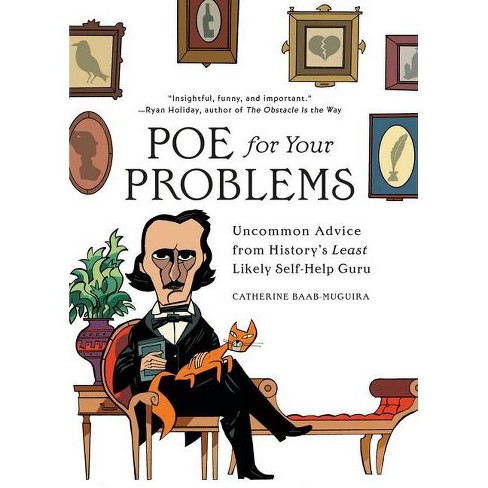 "Say the name Edgar Allan Poe and you'll likely find countless adoring fans in your midst--the man has been dead for 17 decades, yet he's remained as famous and timeless as ever and is considered one of the most important and influential American writers of the 19th century, and dare we say, of all time. With over 4M fans on Facebook (only J.K. Rowling and Stephen King have similar numbers), Poe has been the inspiration behind scores of film and TV adaptations, as well as a craft beer, a football team (Baltimore Ravens), various musicians, and countless pop culture references. Still, of all the writers anywhere, Poe would seem to be the least likely you'd want to turn to for advice--he had tons of failed relationships; not many people liked him; he was a drunk; he was always broke; he often went hungry; even his own death was somewhat of a mystery. But that's also precisely the point. Where Poe failed, he also persevered. This is the idea behind Poe for Your Problems, the world's first darkly inspiring self-help book based on Poe, the most unlikely self-help guru. Poe can cheer us up, lend us courage and inspire us to keep going, if only we got to know him. We f*ck-ups need our own hero and Poe is our natural champion. This book will draw deeply on Poe's poetry, fiction, letters, and essays, in addition to a vast range of new scholarship and scientific research with the express purpose of showing readers how to overcome life's challenges and succeed despite the odds. Included throughout are 30-40 black-and-white illustrations in a handsome, giftable package"--

"Insightful, funny, and important." --Ryan Holiday, New York Times bestselling author of The Obstacle Is the Way and The Daily Stoic As seen in the Wall Street Journal, the Washington Post, and the Baltimore Sun When life's got you down and things aren't going your way, who better to turn to than Edgar Allan Poe? Discover how to say "nevermore" to your problems in this darkly comedic and refreshing self-help guide. Of all the writers anywhere, Poe might be the least likely person you'd ever turn to for advice. His life was a complete dumpster fire: he married his cousin; got fired from one job after another; constantly feuded with friends and rivals; and he was always broke. But that's also precisely the point. Though Poe failed again and again, he also persevered. Drawing deeply on his works and life, Catherine Baab-Muguira takes the familiar image of Poe in a new and surprising direction in this darkly inspiring self-help book. Despite what you might think, Edgar Allan Poe is the perfect person to teach you to say "Nevermore, problems!" and show you how to use all the terrible situations, tough breaks, bad luck, and even your darkest emotions in novel and creative ways to make a name for yourself and carve out your own unique, notorious place in the world. An inspirational tale for black sheep everywhere, Poe for Your Problems will teach you how to overcome life's biggest challenges to succeed at work, love, and art--despite the odds and no matter your flaws.

"Catherine Baab-Muguira is a very, very funny writer, and her relating of Poe's unconventional path to posthumous fame is an entertaining read. But in between the snark and sarcasm in the pages of her book are some razor-sharp observations on human nature and highly astute takes on the illusory concept of 'success.' I highly recommend this book for all you soul-weary travelers who find humor in the darkness of this looney world we live in. Nevermore, motherf*ckers."--D. Randall Blythe, LAMB OF GOD vocalist and author of DARK DAYS

"There is something irresistible about the notion that the Master of the Macabre was the 19th century's answer to Ann Landers--especially when the chapters have such mock-earnest titles as "Embracing Your Inner Neurotic," "Pathological Mate Selection," and "How to Conduct Yourself in a Feud." Bet you just laughed."--Mary McCauley, THE BALTIMORE SUN

"Hilarious and honestly helpful. If you want to read this book purely as a parody of typical self-help fare, you can totally do that and have a great time. But you might notice as you read that you're actually ingesting some good advice from an unlikely source."--Leah Schnelbach, Tor.com

"It turns out that the author of The Cask of Amontillado is the perfect therapist for folks who've been walled up indoors for 18 months."--Ron Charles, THE WASHINGTON POST

"On the surface, it is something of a self-help satire, mining Poe's difficult life to make readers feel better about theirs. Scratch that surface, though, and you find a deeper, more profound purpose . . . a book that is witty yet weighty, designed to provide smiles but also a lift."--The Richmond Times-Dispatch

"Imagine The 7 Habits of Highly Effective People--set in a Stephen King novel. This is my favorite self-help book written with a horror backdrop."--Chris Guillebeau, author of THE ART OF NON-CONFORMITY and THE $100 STARTUP

"Beautifully written, funny, clever, and wise . . . Baab-Muguira not only provides us with invaluable takeaways from Poe's antisocial behavior, but also implores us to embrace our own madness, or as she calls it, our "own weird-ass, occasionally combative truth.'"--John Reeves, author of A FIRE IN THE WILDERNESS

"Books about people's successes are common. Books where you can learn from someone's painful demons and failures are rarer--but far more meaningful. Cat's writing on Poe is insightful, funny and important."--Ryan Holiday, author of THE OBSTACLE IS THE WAY

"Fresh, page-turning, deeply informed and often funny, Catherine Baab-Muguira's Poe for Your Problems brings us a sorely overdue Poe-meets-modernity perspective that won't simply make its readers happier but smarter and even saner, too."--Alan Pell Crawford, author of HOW NOT TO GET RICH: THE FINANCIAL MISADVENTURES OF MARK TWAIN

"I loved this! A book Poe himself might've written: fun, dangerous, a little dark, semi-autobiographical, ambitious but not pompous, and funny and outrageous!"--Steve Hely, producer of THE OFFICE, 30 ROCK, and VEEP, author of HOW I BECAME A FAMOUS NOVELIST

"This is more like an anti-self-help book, a guide to accepting yourself for the substance-abusing, sexually suspect fuckup you already are; a how-to for cultivating grudges, nurturing petty jealousies and vendettas, scheming the destruction of your enemies and indulging delusions of grandeur. I endorse this."--Tim Kreider, author of I WROTE THIS BOOK BECAUSE I LOVE YOU and WE LEARN NOTHING

Catherine Baab-Muguira is a writer and journalist who has contributed to, among others, Slate, Quartz, CNBC and NBC News. A frequent podcast and radio guest, with appearances on NPR and Lifehacker's Upgrade, she lives in Richmond, Virginia with her husband and baby son.
If the item details above aren’t accurate or complete, we want to know about it.

Winnie the Pooh: The Little Things in Life - by Catherine Hapka (Hardcover)