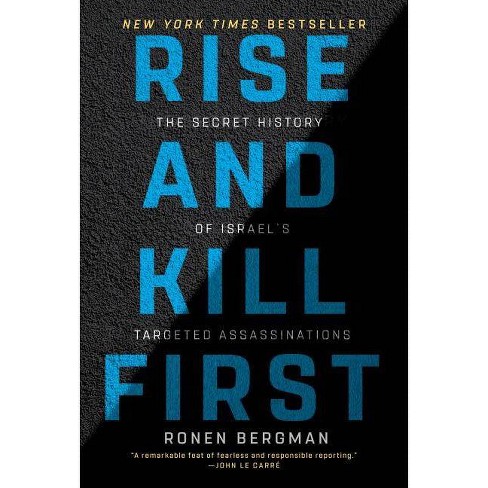 $15.89
MSRP$20.00
no reviews yet
be the first!be the first! ratings
Shipping
Free standard shipping with RedCard
Loading, please wait...
Help us improve this page

"Ronen Bergman has set out in incontestable detail the history and scale of Israel's use of extrajudicial killing as an instrument of defense and foreign policy. His material is stark and sensational, but he steers a steady course through it, even pausing along the way to debate the effectiveness and morality of his subject. The result is a compelling read whatever your point of view."--John le Carrï¿½ "This remarkable account of Israel's targeted-killing programs is the product of nearly eight years of research into what is arguably the most secretive and impenetrable intelligence community in the world. Bergman, an investigative reporter and military analyst, interviewed hundreds of insiders, including assassins, and obtained thousands of classified documents."--The New Yorker "America's difficult relationship with targeted killing and the dilemmas we may face in the future are beautifully illuminated by the longer story of Israel's experiences with assassination in its own endless war against terrorism. . . . Americans now have a terrific new introduction to that story with publication of Ronen Bergman's Rise and Kill First. . . . It moves at a torrid pace and tells stories that would make Jason Bourne sit up and say 'Wow!' It is smart, thoughtful and balanced, and the English translation is superb. It deserves all of the plaudits it has already received."--The New York Times Book Review "Blending history and investigative reporting, Bergman never loses sight of the ethical questions that arise when a state, founded as a refuge for a stateless people who were targets of a genocide, decides it needs to kill in order to survive. . . . This book is full of shocking moments, surprising disturbances in a narrative full of fateful twists and unintended consequences."--The New York Times "Authoritative . . . a chilling portrait of the evolution of the assassination program . . . Bergman has a reputation as an indefatigable journalist who has developed hundreds of informed sources in the defense establishment over the past two decades. . . . Since World War II, Bergman calculates, the Jewish state and its pre-state paramilitary organizations have assassinated more people than any other country in the Western world."--The Washington Post "A must-read . . . [Bergman is] Israel's premier chronicler of the country's principal spy services--the Mossad (Israel's CIA), Shin Bet (its internal security organ) and Aman (military intelligence)."--Newsweek "A textured history of the personalities and tactics of the various secret services . . . makes the case that Israel has used assassination in the place of war, killing half a dozen Iranian nuclear scientists, for instance, rather than launching a military attack . . . [Bergman] says that while the [United States] has tighter constraints on its agents than does Israel, President George W. Bush adopted many Israeli techniques after the terrorist attacks of September 11, 2001, and President Barack Obama launched several hundred targeted killings."--Bloomberg "Leading any list of notable nonfiction books--Jewish or not--must be Ronen Bergman's Rise and Kill First, a massive and extravagantly well-sourced history of the use of the tool of assassination by Israel's intelligence services. . . . One's mouth is often agape with amazement, even shock, while reading."--Haaretz
If the item details above aren’t accurate or complete, we want to know about it. Report incorrect product info.