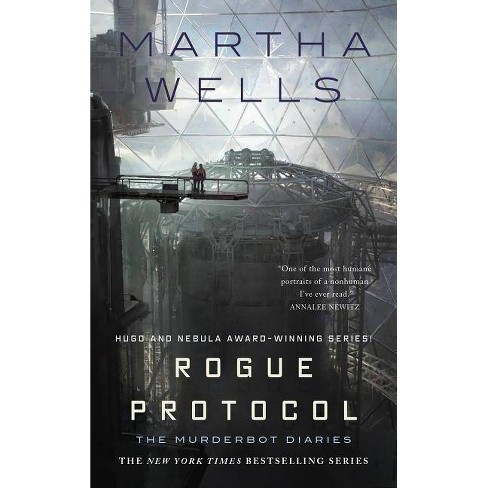 "Sci-fi's favorite antisocial AI is back on a mission. The case against the too-big-to-fail GrayCris Corporation is floundering, and more importantly, authorities are beginning to ask more questions about where Dr. Mensah's SecUnit is. And Murderbot would rather those questions went away. For good"--Dust jacket flap.

Starring a human-like android who keeps getting sucked back into adventure after adventure, though it just wants to be left alone, away from humanity and small talk.

Who knew being a heartless killing machine would present so many moral dilemmas? Sci-fi's favorite antisocial A.I. is back on a mission. The case against the too-big-to-fail GrayCris Corporation is floundering, and more importantly, authorities are beginning to ask more questions about where Dr. Mensah's SecUnit is. And Murderbot would rather those questions went away. For good. I love Murderbot!--New York Times bestselling author Ann Leckie

PRAISE FOR THE MURDERBOT DIARIES SERIES

The Murderbot series is a heart-pounding thriller that never lets up, but it's also one of the most humane portraits of a nonhuman I've ever read. Come for the gunfights on other planets, but stay for the finely drawn portrait of a deadly robot whose smartass goodness will give you hope for the future of humanity. --Annalee Newitz, author of Autonomous Clever, inventive, brutal when it needs to be, and compassionate without ever being sentimental. --Kate Elliott, author of the Spirit Walker trilogy Endearing, funny, action-packed, and murderous. --Kameron Hurley, author of The Stars are Legion "Not only a fun, fast-paced space-thriller, but also a sharp, sometimes moving character study that will resonate with introverts even if they're not lethal AI machines." --Malka Older, author of Infomocracy

We are all a little bit Murderbot... we see ourselves in its skin. And that reading about this sulky, soap-opera-loving cyborg killing machine might be one of the most human experiences you can have in sci-fi right now..--NPR "Wells gives depth to a rousing but basically familiar action plot by turning it into the vehicle by which SecUnit engages with its own rigorously denied humanity." --Publishers Weekly starred review "I already can't wait for the next one." --The Verge "A great kick-off for a continuing series." --Locus PRAISE FOR MARTHA WELLS "Martha Wells writes fantasy the way it was meant to be poignant, evocative, and astonishing. Prepare to be captivated 'til the sun comes up." --Kameron Hurley, author of The Mirror Empire and God's War "The Cloud Roads has wildly original world-building, diverse and engaging characters, and a thrilling adventure plot. It's that rarest of fantasies: fresh and surprising, with a story that doesn't go where ten thousand others have gone before. I can't wait for my next chance to visit the Three Worlds!" --N. K. Jemisin, author of The Fifth Season

Breathtakingly surprising and fun. For readers who missed earlier entry points to this delightful series, now is the time to get on board. --The New York Times on The Edge of Worlds

MARTHA WELLS has written many fantasy novels, including The Wizard Hunters, Wheel of the Infinite, the Books of the Raksura series (beginning with The Cloud Roads and ending with The Harbors of the Sun), and the Nebula-nominated The Death of the Necromancer, as well as YA fantasy novels, short stories, and non-fiction
If the item details above aren’t accurate or complete, we want to know about it. Report incorrect product info.