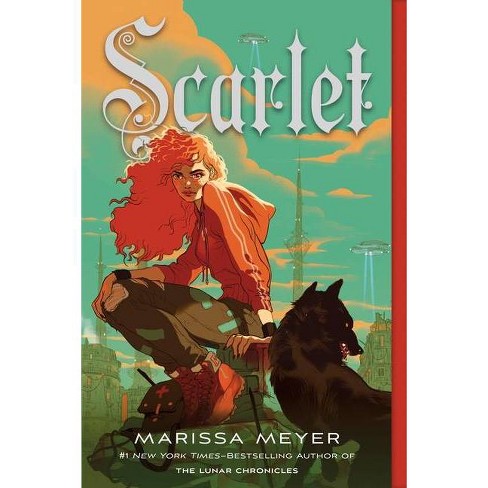 Scarlet Benoit and Wolf, a street fighter who may have information about her missing grandmother, join forces with Cinder as they try to stay one step ahead of the vicious Lunar Queen Levana in this story inspired by Little Red Riding Hood.

The second book in the #1 New York Times- and USA Today- Bestselling Lunar Chronicles series by Marissa Meyer like you've never seen it before, now with new cover art! Our cyborg heroine teams up with two new characters, Scarlet and Wolf, to defend Earth against a wicked space queen.

An interesting mash up of fairy tales and science fiction . . . a cross between Cinderella, Terminator, and Star Wars.--Entertainment Weekly on the Lunar Chronicles Prince Charming among the cyborgs. --The Wall Street Journal on the Lunar Chronicles Cinder is back and trying to break out of prison--even though she'll be the Commonwealth's most wanted fugitive if she does--in this second installment from Marissa Meyer. Halfway around the world, Scarlet Benoit's grandmother is missing. It turns out there are many things Scarlet doesn't know about her grandmother, or the grave danger she has lived in her whole life. When Scarlet encounters Wolf, a street fighter who may have information as to her grandmother's whereabouts, she is loath to trust this stranger, but is inexplicably drawn to him, and he to her. As Scarlet and Wolf unravel one mystery, they encounter another when they meet Cinder. Now, all of them must stay one step ahead of the vicious Lunar Queen Levana. The adventure continues in this fresh fairytale retelling that combines elements of Cinderella and Little Red Riding Hood. Don't miss Marissa Meyer's other books and series': The Lunar Chronicles:
Cinder
Scarlet
Cress
Winter
Stars Above
Fairest The Lunar Chronicles Coloring Book Wires and Nerve: Vol. 1
Wires and Nerve: Vol. 2 Renegades:
Renegades: Book One
Archenemies: Book Two
Supernova: Book Three Heartless

#1 New York Times-Bestselling Series
USA Today Bestseller
Publishers Weekly Bestseller An interesting mash up of fairy tales and science fiction . . . a cross between Cinderella, Terminator, and Star Wars.--Entertainment Weekly Prince Charming among the cyborgs. --The Wall Street Journal Terrific. --Los Angeles Times Marissa Meyer rocks the fractured fairy tale genre. --The Seattle Times Epic awesome. --Bustle A binge-reading treat. --MTV Takes the classic to a whole new level. --NPR "A great choice for all ages, with strong appeal for both girls and boys, these novels will be read and enjoyed--repeatedly." --VOYA, starred review on Scarlet "It's another Marissa Meyer roller coaster ride, part science fiction/fantasy, part political machination with a hint of romance." --Booklist, starred review on Scarlet "Returning fans of Meyer's Cinder will gladly sink their teeth into this ambitious, wholly satisfying sequel." --Publishers Weekly, starred review on Scarlet "The author has stepped up the intrigue and plot from the first novel, and readers will be eagerly awaiting the next." --School Library Journal on Scarlet "The sci-fi elements are stronger than the fairy-tale allusions this time out, but the story remains just as absorbing. . . . Readers will be thrilled to discover that this steampunky fairy-tale/sci-fi mashup promises two more installments." --Bulletin of the Center for Children's Books on Scarlet "Further development of this futuristic world plus plenty of action, surprises, and a fast pace will keep readers invested in their journey." --The Horn Book on Scarlet

Shatter Me - by Tahereh Mafi

5 out of 5 stars
Would recommend
TashD - 2 years ago
As much as I adored Cinder, Scarlet was even better! It was a fun and original take on Red Riding Hood and remained unpredictable, while still sticking to elements of the original. Marissa Meyer seamlessly connected Cinder and Scarlet’s stories and seeing Cinder and Kai’s story progress was great. I loved how much of a firecracker Scarlet was. And I absolutely adored Thorne. 5 stars for this spunky, fast paced retelling!
1 guest found this review helpful. Did you?

4 out of 5 stars
Katiekat3596 - 2 years ago
This series is just so clever! Marissa Meyer manages to still spin fairytales that are old and familiar, while also making then fresh and exciting. I am looking forward to the next one!
1 guest found this review helpful. Did you?

5 out of 5 stars
Would recommend
Angel - 7 years ago
I fell in love with this series took me 2 days to finish! I love this book and i would recommend to all book nerds. Plus the book is very hard to ruin so its really good quality.
3 guests found this review helpful. Did you?