Scrappy Little Nobody - by Anna Kendrick 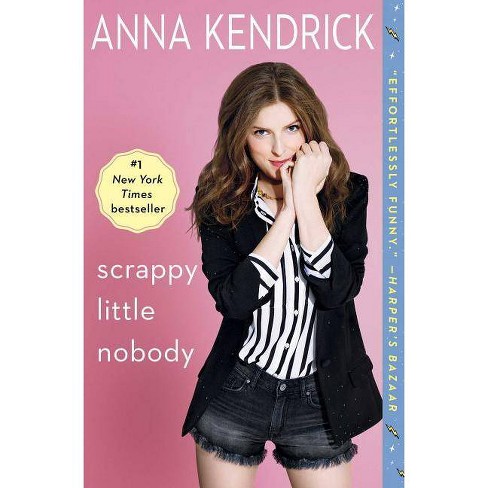 The New York Times bestselling collection of humorous autobiographical essays by the Academy Award nominated actress and star of Up in the Air and Pitch Perfect. Even before she made a name for herself on the silver screen starring in films like Pitch Perfect, Up in the Air, Twilight, and Into the Woods, Anna Kendrick was unusually small, weird, and "10 percent defiant." At the ripe age of thirteen, she had already resolved to "keep the crazy inside my head where it belonged. Forever. But here's the thing about crazy: It. Wants. Out." In Scrappy Little Nobody, she invites readers inside her brain, sharing extraordinary and charmingly ordinary stories with candor and winningly wry observations. With her razor-sharp wit, Anna recounts the absurdities she's experienced on her way to and from the heart of pop culture as only she can--from her unusual path to the performing arts (Vanilla Ice and baggy neon pants may have played a role) to her double life as a middle-school student who also starred on Broadway to her initial "dating experiments" (including only liking boys who didn't like her back) to reviewing a binder full of butt doubles to her struggle to live like an adult woman instead of a perpetual "man-child." Enter Anna's world and follow her rise from "scrappy little nobody" to somebody who dazzles on the stage, the screen, and now the page--with an electric, singular voice, at once familiar and surprising, sharp and sweet, funny and serious (well, not that serious).

"Scrappy Little Nobody lets readers feel like they have spent an afternoon chatting with their closest friend." --Booklist "[Kendrick] displays real wit and comic timing on the page." --Publishers Weekly "[Kendrick] writes an honest, effortlessly funny and alternatively relatable and aspirational reflection on her personal and professional life to date. Her essays jump from grade school reminiscences to Louis Vuitton Oscar parties to the typical highs and lows of adult dating life, revealing the witty, talented and disarmingly real girl behind the Hollywood name." --Harper's Bazaar "I had a giant smile on my face the entire time I was reading Scrappy Little Nobody." --Brooklyn Paper "Kendrick has won legions of fans for her movies and her quips on Twitter, and her wit continues in this collection of autobiographical essays recounting some of the most memorable, charming, and even relatable moments of her life--from growing up in New England suburbia to working her way up to become one of Hollywood's darlings." --Buzzfeed "Kendrick writes essays about her life in the witty, self-deprecating voice that's made her a must-follow on Twitter." --Time "Of the pantheon of funny, smart, strong screen women to write a memoir, Anna Kendrick's is a welcome, entertaining and endearingly honest installment." --The Guardian "Ridiculously entertaining." --Associated Press "The Pitch Perfect star can sing, act, and write hilarious tweets. Fortunately she's imbued the pieces in Scrappy Little Nobody with that same humor." --Entertainment Weekly "The craziest thing of all is that [Kendrick] manages to seem likable and down-to-earth across 275 pages(!). . . . In an era of manufactured authenticity, it's honestly impressive." --Chicago Tribune "This collection of essays about the life of everyone's favorite actress Anna Kendrick will have you laughing for days. After all, this is the woman who could even make Twilight funny." --Bustle "This A-list firecracker does it all--blockbusters, indies, dramas, musicals, and, now, a memoir--with sleight-of-hand dexterity and fearsome wit. . . . Scrappy Little Nobody is a fizzy, funny collection of personal essays that very successfully approximates what it's like to spend time with Kendrick (long a Twitter fave, now to more than 5 million) and, as such, seems likely to have extremely widespread appeal." --ELLE
If the item details above aren’t accurate or complete, we want to know about it. Report incorrect product info.