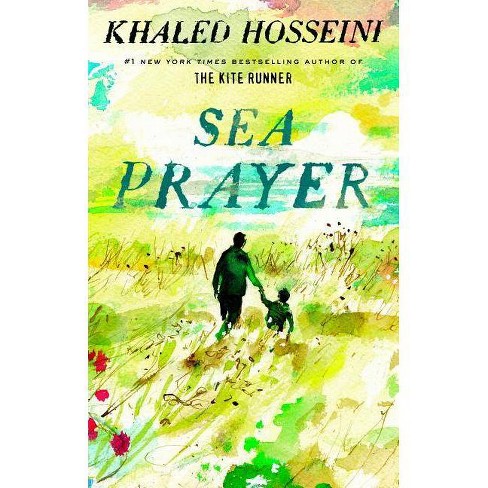 "This story, in a different version, formed the narration of 'Sea prayer, a 360 story inspired by refugee Alan Kurdi,' an animated video published online by The guardian"--Copyright pag

NEW YORK TIMES bestseller An illustrated book on the refugee crisis that will break your heart in under 48 pages, from the #1 New York Times-bestselling author of The Kite Runner, A Thousand Splendid Suns, and And the Mountains Echoed. A meaningful read to gift this holiday season. Intensely moving. . .Powerfully evocative of the plight in which displaced populations find themselves.- Kirkus, STARRED Review

Hosseini's story, aimed at readers of all ages, does not dwell on nightmarish fates; instead, its emotional power flows from the love of a father for his son.- Publishers Weekly, STARRED BOX Review A short, powerful, illustrated book written by beloved novelist Khaled Hosseini in response to the current refugee crisis, Sea Prayer is composed in the form of a letter, from a father to his son, on the eve of their journey. Watching over his sleeping son, the father reflects on the dangerous sea-crossing that lies before them. It is also a vivid portrait of their life in Homs, Syria, before the war, and of that city's swift transformation from a home into a deadly war zone. Impelled to write this story by the haunting image of young Alan Kurdi, the three-year-old Syrian boy whose body washed upon the beach in Turkey in September 2015, Hosseini hopes to pay tribute to the millions of families, like Kurdi's, who have been splintered and forced from home by war and persecution, and he will donate author proceeds from this book to the UNHCR (the UN Refugee Agency) and The Khaled Hosseini Foundation to help fund lifesaving relief efforts to help refugees around the globe. Khaled Hosseini is one of the most widely read writers in the world, with more than fifty-five million copies of his novels sold worldwide in more than seventy countries. Hosseini is also a Goodwill Envoy to the UNHCR, and the founder of The Khaled Hosseini Foundation, a nonprofit that provides humanitarian assistance to the people of Afghanistan.

This is a slim book, but one that readers young and old won't soon forget. - Bookish Powerful. - Time Magazine Slim, but essential. . . In its elevation of the pastoral and critique of a dark reality through the interplay of word and image, Sea Prayer calls to mind William Blake's humanitarian 'Songs of Innocence and Experience.' The text's minimalism complements London illustrator Dan Williams' gorgeous watercolor and ink illustrations. - San Francisco Chronicle 'Sea Prayer' will take your breath away with its simplicity and grace . . . I started digging into this short masterpiece. The world stopped . . . I carried it around for a month, reading it everywhere. - The Florida Times-Union

The book may be brief, but it is beautiful, poetic - a distillation of his strengths ... It combines Hosseini's multiple personae, as a wordsmith, as a father and even as a doctor. - The Sunday Times Magazine Dan Williams's watercolours are a haunting companion to the contemplative and poetic story of a father fleeing Syria with his son. Though considerably shorter than The Kite Runner, A Thousand Splendid Suns or And the Mountains Echoed, it opens up as many powerful emotions about family, survival and childhood. - The Guardian Khaled Hosseini's newest book is as moving as any of his novels.- Independent

The book may be brief, but it is beautiful, poetic - a distillation of his strengths ... It combines Hosseini's multiple personae, as a wordsmith, as a father and even as a doctor. - The Sunday Times Magazine

This inspiring illustrated book is a testament to the fact that strength comes in many forms and that life is precious."--PopSugar Sea Prayer provides an opportunity for parents to discuss the details of the Syrian Refugee Crisis with their children and to broach the topic of the very real uncertainty refugee families face when they are torn from their homes. -Columbia Journal Sea Prayer is a remarkable response to the current refugee crisis happening in our world today . . . Hosseini's story is a must-read for all people around the world. - Signature-Reads Hosseini writes a tender and searching exploration of the forces that drive families to flee their countries and the terrible grief for all that is left behind. After reading this devastating story, you will never think about home, refugees, or family the same way again. - Brightly Intensely moving . . . Powerfully evocative of the plight in which displaced populations find themselves . . . The book reads like an emotional gut-punch. . . It is impossible to read without feeling intense compassion for those--and there are thousands--whose lives resemble those of the characters in the book. Powerful. - Kirkus, STARRED Review

Hosseini's story, aimed at readers of all ages, does not dwell on nightmarish fates; instead, its emotional power flows from the love of a father for his son . . . In Williams's loosely stroked ink-and-wash spreads, the corals and greens of the Syrian countryside give way to war's gray shadows and the sea's blue hues. Expansive views of sky and water both temper the text's emotional build and render the figures in them small and fragile. Together, the evocative illustrations and graceful, compelling prose make it clear that Marwan and his parents have no choice but to trust the sea. - Publishers Weekly, STARRED BOX Review Praise for Khaled Hosseini:

"Mr. Hosseini's narrative gifts have deepened over the years. . . . That Mr. Hosseini manages . . . to actually succeed in spinning his characters' lives into a deeply affecting choral work is a testament both to his intimate knowledge of their inner lives, and to his power as an old-fashioned storyteller." --The New York Times

"Hosseini's writing makes our hearts ache, our stomachs clench, and our emotions reel. . . . Hosseini tells this saddest of stories in achingly beautiful prose through stunningly heroic characters whose spirits somehow grasp the dimmest rays of hope." --USA Today "Some writers, like Khaled Hosseini, know how to whisk rough moral fiber into something exquisite . . . over and over again, he takes complicated characters and roasts them slowly, forcing us to revise our judgments about them and to recognize the good in the bad and vice versa." --The Washington Post

"Readers flocked to The Kite Runner and A Thousand Splendid Suns because Hosseini so richly illuminated an unfamiliar world . . . the heartwarming closing pages [of And the Mountains Echoed] remind us why the author has attracted such an ardent following." --The Boston Globe

Khaled Hosseini was born in Kabul, Afghanistan, and moved to the United States in 1980. He is the author of the New York Times bestsellers The Kite Runner, A Thousand Splendid Suns, and And the Mountains Echoed. Hosseini is also a U.S. Goodwill Envoy to the UNHCR, the UN Refugee Agency, and the founder of The Khaled Hosseini Foundation, a nonprofit that provides humanitarian assistance to the people of Afghanistan. Khaled Hosseini will donate author proceeds from this book to UNHCR, the UN Refugee Agency, and to The Khaled Hosseini Foundation to help fund life-saving relief efforts to help refugees around the globe.
If the item details above aren’t accurate or complete, we want to know about it. Report incorrect product info.