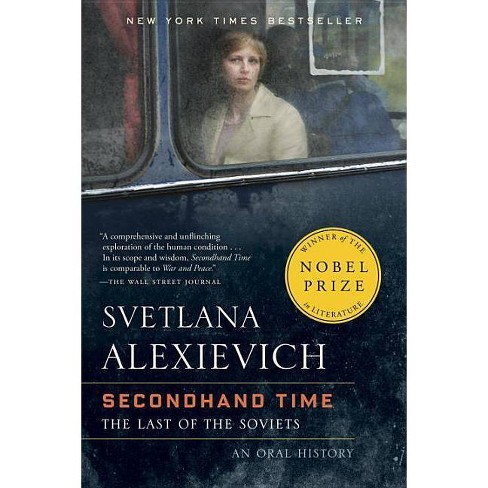 Alexievich charts the decline of Soviet culture and speculates on what will rise from the ashes of communism. Alexievich gives voice to women and men whose stories are lost in the official narratives of nation-states, creating [an] alternative history from the personal and private stories of individuals.

NEW YORK TIMES BESTSELLER - A symphonic oral history about the disintegration of the Soviet Union and the emergence of a new Russia, from Svetlana Alexievich, winner of the Nobel Prize in Literature

When the Swedish Academy awarded Svetlana Alexievich the Nobel Prize, it cited her for inventing "a new kind of literary genre," describing her work as "a history of emotions--a history of the soul." Alexievich's distinctive documentary style, combining extended individual monologues with a collage of voices, records the stories of ordinary women and men who are rarely given the opportunity to speak, whose experiences are often lost in the official histories of the nation. In Secondhand Time, Alexievich chronicles the demise of communism. Everyday Russian citizens recount the past thirty years, showing us what life was like during the fall of the Soviet Union and what it's like to live in the new Russia left in its wake. Through interviews spanning 1991 to 2012, Alexievich takes us behind the propaganda and contrived media accounts, giving us a panoramic portrait of contemporary Russia and Russians who still carry memories of oppression, terror, famine, massacres--but also of pride in their country, hope for the future, and a belief that everyone was working and fighting together to bring about a utopia. Here is an account of life in the aftermath of an idea so powerful it once dominated a third of the world. A magnificent tapestry of the sorrows and triumphs of the human spirit woven by a master, Secondhand Time tells the stories that together make up the true history of a nation. "Through the voices of those who confided in her," The Nation writes, "Alexievich tells us about human nature, about our dreams, our choices, about good and evil--in a word, about ourselves." Praise for Svetlana Alexievich and Secondhand Time "The nonfiction volume that has done the most to deepen the emotional understanding of Russia during and after the collapse of the Soviet Union of late is Svetlana Alexievich's oral history Secondhand Time."--David Remnick, The New Yorker

"There are many worthwhile books on the post-Soviet period and Putin's ascent. . . . But the nonfiction volume that has done the most to deepen the emotional understanding of Russia during and after the collapse of the Soviet Union of late is Svetlana Alexievich's oral history Secondhand Time."--David Remnick, The New Yorker "Like the greatest works of fiction, Secondhand Time is a comprehensive and unflinching exploration of the human condition. . . . Alexievich's tools are different from those of a novelist, yet in its scope and wisdom, Secondhand Time is comparable to War and Peace."--The Wall Street Journal "Already hailed as a masterpiece across Europe, Secondhand Time is an intimate portrait of a country yearning for meaning after the sudden lurch from Communism to capitalism in the 1990s plunged it into existential crisis. A series of monologues by people across the former Soviet empire, it is Tolstoyan in scope, driven by the idea that history is made not only by major players but also by ordinary people talking in their kitchens."--The New York Times "The most ambitious Russian literary work of art of the century . . . There's been nothing in Russian literature as great or personal or troubling as Secondhand Time since Aleksandr Solzhenitsyn's The Gulag Archipelago, nothing as necessary and overdue. . . . Alexievich's witnesses are those who haven't had a say. She shows us from these conversations, many of them coming at the confessional kitchen table of Russian apartments, that it's powerful simply to be allowed to tell one's own story. . . . This is the kind of history, otherwise almost unacknowledged by today's dictatorships, that matters."--The Christian Science Monitor "Alexievich's masterpiece--not only for what it says about the fall of the Soviet Union but for what it suggests about the future of Russia and its former satellites. . . Stylistically, Secondhand Time, like her other books, produces a mosaic of overlapping voices... deepened by extraordinary stories of love and perseverance."--Newsweek "A trove of emotions and memories, raw and powerful . . . [Secondhand Time] is one of the most vivid and incandescent accounts of [Soviet] society caught in the throes of change that anyone has yet attempted. . . . Alexievich stations herself at a crossroads of history and turns on her tape recorder. . . . [She] makes it feel intimate, as if you are sitting in the kitchen with the characters, sharing in their happiness and agony."--The Washington Post "An enormous investigation of the generation that saw communism fall, [Secondhand Time] gives a staggeringly deep and plural picture of a people that has lost its place in history."--San Francisco Chronicle

Svetlana Alexievich was born in Ivano-Frankivsk, Ukraine, in 1948 and has spent most of her life in the Soviet Union and present-day Belarus, with prolonged periods of exile in Western Europe. Starting out as a journalist, she developed her own nonfiction genre, which gathers a chorus of voices to describe a specific historical moment. Her works include War's Unwomanly Face (1985), Last Witnesses (1985), Zinky Boys (1990), Voices from Chernobyl (1997), and Secondhand Time (2013). She has won many international awards, including the 2015 Nobel Prize in Literature "for her polyphonic writings, a monument to suffering and courage in our time."
If the item details above aren’t accurate or complete, we want to know about it. Report incorrect product info.