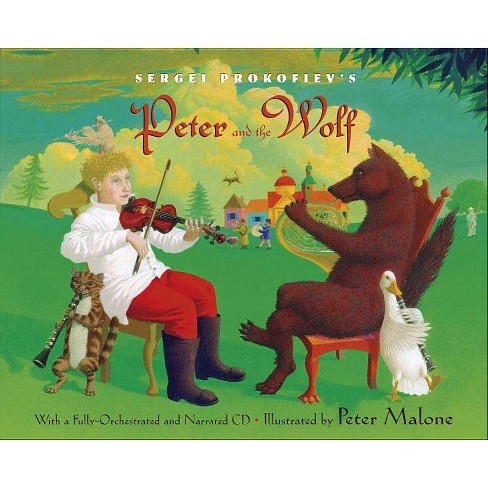 This book-and-CD package is an ideal way to introduce children to classical music. A new retelling of Prokofiev's musical fairy tale is accompanied by a CD with music performed by the Cincinnati Pops and word-for-word narration by Peter A. Thomas. Full color.

THERE IS NO better way to introduce children to classical music than with Prokofiev s musical fairy tale of the little boy (played by all the strings of the orchestra) who, with the help of a bird (played by the flute), outsmarted the big, bad wolf (played by the French horns). And now with this book and CD package, children can look and listen all at the same time. A new retelling by Janet Schulman follows the basic story, but with a kinder ending for both the big bad wolf and the argumentative duck. Peter Malone s paintings have the luminous quality of old Russian masters. The CD, with music performed by the Cincinnati Pops and word-for-word narration by Peter A. Thomas, was made exclusively for this book and CD package."

Sergei Prokofiev, one of the greatest composers of the 20th century, was born in 1891 in the Ukraine and died in 1953 in Moscow. He composed Peter and the Wolf in 1936. Peter Malone has illustrated many distinguished picture books, including Brother Sun, Sister Moon: The Life and Stories of St. Francis, The World of King Arthur and His Court, and Magic Flute. Peter Malone lives in Bath, England.
If the item details above aren’t accurate or complete, we want to know about it. Report incorrect product info.