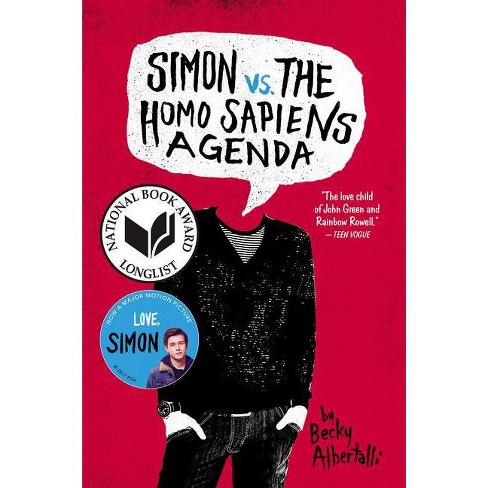 "Sixteen-year-old, not-so-openly-gay Simon Spier is blackmailed into playing wingman for his classmate or else his sexual identity--and that of his pen pal--will be revealed."--

A remarkable gift of a novel.--Andrew Smith, author of Grasshopper Jungle

I am so in love with this book.--Nina LaCour, author of Hold Still

Sixteen-year-old and not-so-openly gay Simon Spier prefers to save his drama for the school musical. But when an email falls into the wrong hands, his secret is at risk of being thrust into the spotlight. Now change-averse Simon has to find a way to step out of his comfort zone before he's pushed out--without alienating his friends, compromising himself, or fumbling a shot at happiness with the most confusing, adorable guy he's never met.

Incredibly funny and poignant, this twenty-first-century coming-of-age, coming out story--wrapped in a geek romance--is a knockout of a debut novel by Becky Albertalli.

Plus don't miss Yes No Maybe So, Becky Albertalli's and Aisha Saeed's heartwarming and hilarious new novel, coming in 2020!

"Debut novelist Albertalli writes believably in the voice of a confused, openhearted 16-year-old. Readers will fall madly in love with Simon."--Publishers Weekly (starred review) "Funny, moving and emotionally wise."--Kirkus Reviews (starred review) "Albertalli paints a stunningly three-dimensional, cliche-free world for Simon that bursts with unforgettable characters. Savor it, because you'll read it for the first time only once. Worthy of Fault in Our Stars-level obsession."--Entertainment Weekly "Though there are realistic moments of tension, the dominant sentiment here is the delicious excitement of finding your best self in the eyes of someone else; not since Levithan's Boy Meets Boy have readers been treated to such a happy sigh of a book about two boys falling in love."--Bulletin of the Center for Children's Books (starred review) "I love you, SIMON. I LOVE YOU! And I love this fresh, funny, live-out-loud book."--Jennifer Niven, bestselling author of All the Bright Places "Love child of John Green and Rainbow Rowell."--Teen Vogue "Are we absolutely certain that Becky Albertalli didn't just steal the diary of a hilariously observant teenage boy? Simon vs. the Homo Sapiens Agenda is a pitch-perfect triumph of wit and wordplay that feels timelessly, effortlessly now."--Tim Federle, author of Better Nate than Ever "Becky Albertalli has written the best kind of love story: the kind in which you fall in love with the characters as they fall in love with each other."--Alex Sanchez, Lambda Award-winning author of Rainbow Boys and Boyfriends with Girlfriends "Delightfully funny and at times heart-wrenching. Readers will ache for Simon's awkwardness, cheer his small triumphs, but, most of all, fall in love with this kid and with this remarkable gift of a novel."--Andrew Smith, author of Grasshopper Jungle "I am so in love with this book."--Nina LaCour, author of Hold Still "Rife with realistic, high school relationships and drama, with a laugh or two at every turn, this is a coming-of-age, coming-out, and defying-the-odds story with which many teens will identify."--SLJ
If the item details above aren’t accurate or complete, we want to know about it. Report incorrect product info.