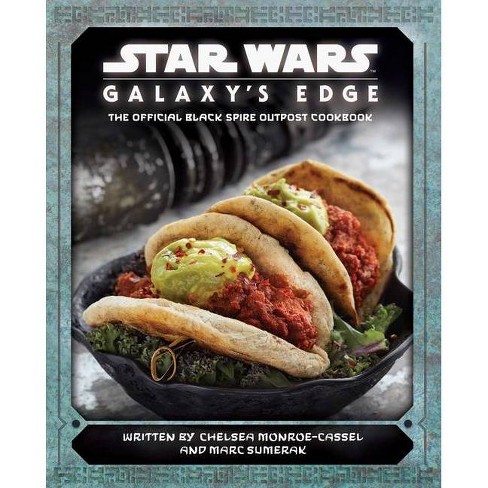 Based on the delicious delicacies found in Black Spire Outpost on the planet Batuu, this cookbook provides fans with a wealth of delicious intergalactic recipes.

Inspired by the cuisine from the exciting new Star Wars: Galaxy's Edge themed lands at Walt Disney World and Disneyland, Star Wars: Galaxy's Edge: The Official Black Spire Outpost Cookbook is the ultimate source for creating out-of-this-world meals and treats from a galaxy far, far away. Join intergalactic gourmet Strono "Cookie" Tuggs for a mouthwatering journey into the cuisine of Black Spire Outpost and beyond. From the swamps of Dagobah to the forests of Endor and the deserts of Jakku, chef extraordinaire Strono "Cookie" Tuggs has traveled countless light-years to compile the galaxy's most delicious recipes into this unique volume. With Cookie as your guide, journey to the streets of Black Spire Outpost and discover delectable delicacies such as Braised Shaak Roast, Nerf Kebabs, Mustafarian Lava Buns, Huttese Slime Pods, Spicy Mandalorian Stew, and much more. Featuring seventy recipes--including sides, sauces, soups, breads, main courses, desserts, and drinks--this comprehensive cookbook is a hyperspace route to the tastiest treats in the galaxy, bringing a little taste of Black Spire Outpost right into your own home.

"Cool concepts, and in-universe background on every recipe... an elevated take on a fandom tie-in. It'd be a great gift for someone you know who likes Star Wars and making food."-- "FangirlBlog.com" "So many of the recipes can be eaten regularly...Buy it if you're planning a Star Wars rewatch party before The Last Skywalker comes out, or as a gift." -- "TheGeekiary.com"

Chelsea Monroe-Cassel is the coauthor of A Feast of Ice and Fire: The Official Game of Thrones Companion Cookbook and the author of World of Warcraft: The Official Cookbook, Hearthstone: Innkeeper's Tavern Cookbook, and The Elder Scrolls: The Official Cookbook. Her work is a synthesis of imagination and historical research. This passion has led her to a career of transforming imaginary foods into reality. She greatly enjoys foreign languages, treasure hunting, history, and all things related to honey. Marc Sumerak is an Eisner and Harvey Award-nominated writer and editor whose work over the past two decades has been featured in comics, books, and video games showcasing some of pop culture's most beloved franchises, including Marvel, Star Wars, Harry Potter, Firefly, Ghostbusters, Back to the Future, and many more. Find out more at www.sumerak.com. He is based in Cleveland, Ohio.
If the item details above aren’t accurate or complete, we want to know about it. Report incorrect product info.