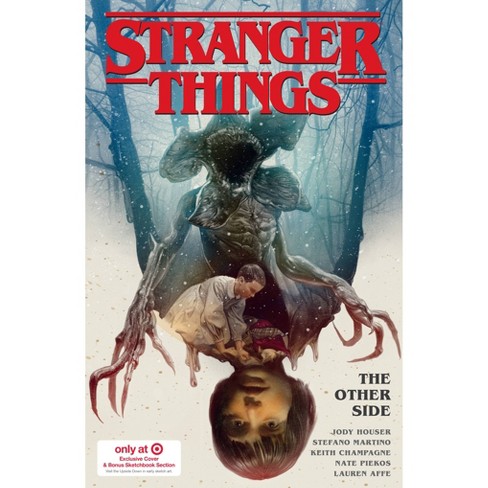 "Collects issues #1 through #4 of the Dark Horse comic-book series Stranger Things: the other side."

The hit Netflix series from the Duffer Brothers is now a spine-tingling comic that recounts Will Beyers' harrowing survival in the treacherous Upside Down! When Will Byers finds himself in the Upside Down, an impossible dark parody of his own world, he's understandably frightened. But that's nothing compared with the fear that takes hold when he realizes what's in that world with him! Follow Will's struggle through the season one events of the hit Netflix show Stranger Things! Written by Jody Houser (Mother Panic, Faith) and illustrated by Stefano Martino (Doctor Who, Catwoman)

Jody Houser decided she wanted to be a writer when she was eight years old and never looked back. For better or worse, no one ever suggested that she stop. She earned her MFA in Creative Writing at Emerson College in Boston, where she completed her master's thesis in screenwriting and was a winner of the Rod Parker Fellowship for Playwriting.

Starting in 2006, Jody began experimenting with webcomics. She is the creator behind the webcomic Cupcake POW!, which launched in 2010 and is currently available on comiXology Submit.

Jody has written Faith for Valiant Comics, Max Ride: Ultimate Flight and Agent May for Marvel, and Orphan Black for IDW. She has been a contributing writer to numerous comic anthologies including Avengers: No More Bullying, Vertigo CMYK: Magenta, and both Womanthology series.
If the item details above aren’t accurate or complete, we want to know about it. Report incorrect product info.