The Cost of Knowing - by Brittney Morris 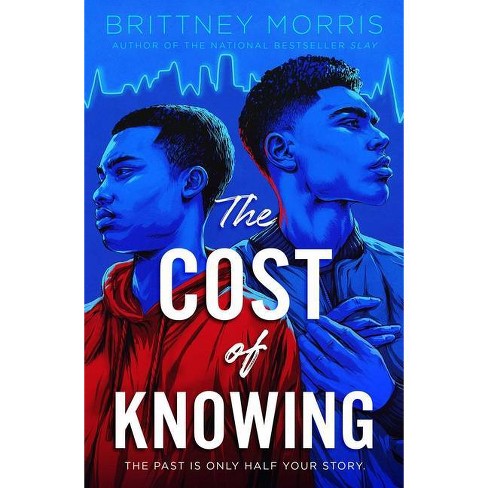 Sixteen-year-old Alex Rufus's curse of seeing the future distracts him from being and doing his best, but when he sees his little brother Isaiah's imminent death, he races against time, death, and circumstances to save him.

Dear Martin meets They Both Die at the End in this gripping, evocative novel about a Black teen who has the power to see into the future, whose life turns upside down when he foresees his younger brother's imminent death, from the acclaimed author of SLAY. Sixteen-year-old Alex Rufus is trying his best. He tries to be the best employee he can be at the local ice cream shop; the best boyfriend he can be to his amazing girlfriend, Talia; the best protector he can be over his little brother, Isaiah. But as much as Alex tries, he often comes up short. It's hard to for him to be present when every time he touches an object or person, Alex sees into its future. When he touches a scoop, he has a vision of him using it to scoop ice cream. When he touches his car, he sees it years from now, totaled and underwater. When he touches Talia, he sees them at the precipice of breaking up, and that terrifies him. Alex feels these visions are a curse, distracting him, making him anxious and unable to live an ordinary life. And when Alex touches a photo that gives him a vision of his brother's imminent death, everything changes. With Alex now in a race against time, death, and circumstances, he and Isaiah must grapple with their past, their future, and what it means to be a young Black man in America in the present.

* "This portrait of Black boys as sensitive, vulnerable, and complex is refreshing, unfolding within a powerful and provocative narrative about brotherly love and the insidiousness of racism. Morris seamlessly and beautifully weaves together multiple plotlines (including frank talk about sex) with crisp and sometimes humorous dialogue that always rings true. A timely, poignant page-turner about grief, love, and facing your fears."--Kirkus Reviews, starred * "Morris succeeds in blending moments of 'Black boy joy, ' superhuman abilities, intergenerational trauma, mental health (including a description of self-harm), and loss into a resonant story of fraternal love that first compels, then devastates, and will be remembered for a long time." --Publishers Weekly, starred "This thoughtful, character-rich novel is alternatingly joyous and heartbreaking...A great pick for fans of Nic Stone's Dear Martin (2017) or Kim Johnson's This Is My America (2020)."--Booklist "The Cost of Knowing is a tense and timely portrayal of powerful Black boys growing up too soon with knowledge that the past and future are aligned against them. Morris writes the best kind of speculative fiction, the kind where reality is close enough to touch." --Lamar Giles, author of Not So Pure and Simple and Spin "Emotional. Tense. And full of teen boy angst, Morris offers redemption and a fresh start for two brothers crushed by the world around them and at odds with each other. Pick it up for the super powers. Stay for the brotherly love and unsolved mysteries." --Gabby Rivera, author of Juliet Takes a Breath and Marvel's America "The Cost of Knowing is taut and powerful, with a beautifully rendered sibling relationship at its heart. I was deeply moved." --Rory Power, New York Times bestselling author of Wilder Girls and Burn Our Bodies Down

Brittney Morris is the author of SLAY and The Cost of Knowing. She is also the founder and former president of the Boston University Creative Writing Club. She holds a BA in economics. You can find her online at AuthorBrittneyMorris.com and on Twitter or Instagram @BrittneyMMorris.
If the item details above aren’t accurate or complete, we want to know about it. Report incorrect product info.