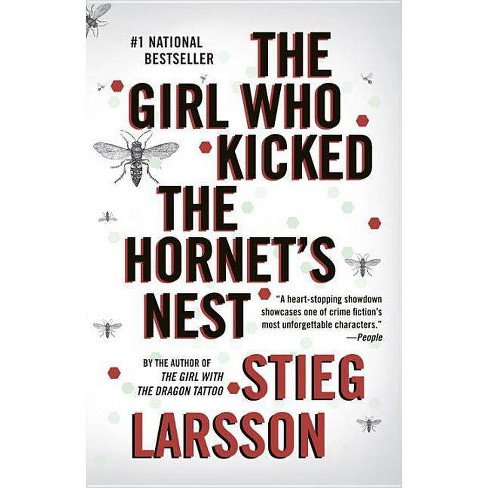 In the concluding volume of Larsson's Millennium trilogy, Lisbeth Salander lies in critical condition in a Swedish hospital, a bullet in her head. But she's fighting for her life in more ways than one: if and when she recovers, she'll stand trial for three murders. With the help of Mikael Blomkvist, she'll need to identify those in authority who have allowed the vulnerable, like herself, to suffer abuse and violence.

In the third volume of the Millennium series, Lisbeth Salander lies in critical condition in a Swedish hospital, a bullet in her head.

But she's fighting for her life in more ways than one: if and when she recovers, she'll stand trial for three murders. With the help of Mikael Blomkvist, she'll need to identify those in authority who have allowed the vulnerable, like herself, to suffer abuse and violence. And, on her own, she'll seek revenge--against the man who tried to killer her and against the corrupt government institutions that nearly destroyed her life.

"A heart-stopping showdown showcases . . . one of crime fiction's most unforgettable characters." --People

"Gripping. . . . Lisbeth Salander . . . is one of the most original characters in a thriller to come along in a while."--Michiko Kakutani, The New York Times "Larsson's vivid characters, the depth of detail across three books, the powerfully imaginative plot, and the sheer verve of the writing make the trilogy a masterpiece of the genre."--The Economist "The literary equivalent of a caffeine rush. . . . Larsson was one of those rare writers who could keep you up until 3 a.m. and then make you want to rush home the next night to do it again." --Newsweek "Salander is someone you will never forget. . . . Anyone who enjoys grounding their imaginations in hundreds . . . of exciting pages about the way we live now ought to take advantage of this trilogy." --Chicago Tribune "The pages fly. . . . The pulse quickens." --The Boston Globe "A wild, careening ride." --The Philadelphia Inquirer

"The action is wham-bam from the start. . . . [with] an eye-popping surprise ending."--St. Louis Post-Dispatch "Fully lives up to the excellence of the previous two and . . . brings the saga to a satisfactory conclusion. . . . A modern masterpiece." --The Washington Post Book World "Satisfying. . . . [Lisbeth Salander] bursts off the page, a vibrant, forcefully 'real' character."--The Plain Dealer "Enough twists to keep even the most astute reader guessing." --The Denver Post

"Complex, satisfying, clever, moral . . . This is a grown-up novel for grown-up readers, who want something more than a quick fix and a car chase." --The Guardian (London) "An old-fashioned, well-paced political thriller with its roots in Swedish history and a cast of interesting and colorful characters." --Pittsburgh Post-Gazette "Reading Stieg Larsson produces a kind of rush--rather like a strong cup of coffee." --The New York Times Book Review "Salander herself is a magnificent creation: a feminist avenging angel." --Irish Independent "Relentlessly exciting. . . . A fitting ending to an outstanding crime trilogy. Larsson deserves every scrap of his reputation as a master storyteller." --Time Out London

"Exhilarating. . . . Larsson's was an undeniably powerful voice in crime fiction that will be sorely missed." --Publishers Weekly

Stieg Larsson, who lived in Sweden, was the editor in chief of the magazine Expo and a leading expert on antidemocratic, right-wing extremist and Nazi organizations. He died in 2004, shortly after delivering the manuscripts for The Girl with the Dragon Tattoo, The Girl Who Played with Fire, and The Girl Who Kicked the Hornet's Nest.
If the item details above aren’t accurate or complete, we want to know about it. Report incorrect product info.