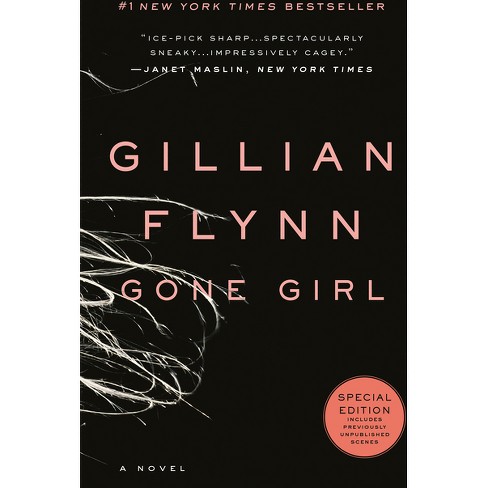 On a warm summer morning in North Carthage, Missouri, it is Nick and Amy's fifth wedding anniversary. Presents are being wrapped and reservations made when Nick's clever and beautiful wife disappears from their rented McMansion on the Mississippi River. Husband-of-the-year Nick isn't doing himself any favors with cringe-worthy daydreams about the slope and shape of his wife's head, but passages from Amy's diary reveal the alpha-girl perfectionist could have put anyone dangerously on edge. Under mounting pressure from police and the media -- as well as Amy's fiercely doting parents -- the town golden boy parades an endless series of lies, deceits, and inappropriate behavior. Nick is oddly evasive, and he's definitely bitter -- but is he really a killer? As the cops close in, every couple in town is soon wondering how well they really know the one they love.

On a warm summer morning in North Carthage, Missouri, it is Nick and Amy Dunne's fifth wedding anniversary. Presents are being wrapped and reservations are being made when Nick's clever and beautiful wife disappears. Husband-of-the-Year Nick isn't doing himself any favors with cringe-worthy daydreams about the slope and shape of his wife's head, but passages from Amy's diary reveal the alpha-girl perfectionist could have put anyone dangerously on edge. Under mounting pressure from the police and the media--as well as Amy's fiercely doting parents--the town golden boy parades an endless series of lies, deceits, and inappropriate behavior. Nick is oddly evasive, and he's definitely bitter--but is he really a killer? NAMED ONE OF THE BEST BOOKS OF THE YEAR BY San Francisco Chronicle - St. Louis Post Dispatch - Chicago Tribune - HuffPost - Newsday "Absorbing . . . In masterly fashion, Flynn depicts the unraveling of a marriage--and of a recession-hit Midwest--by interweaving the wife's diary entries with the husband's first-person account."--New Yorker "Ms. Flynn writes dark suspense novels that anatomize violence without splashing barrels of blood around the pages . . . Ms. Flynn has much more up her sleeve than a simple missing-person case. As Nick and Amy alternately tell their stories, marriage has never looked so menacing, narrators so unreliable."--The Wall Street Journal "The story unfolds in precise and riveting prose . . . even while you know you're being manipulated, searching for the missing pieces is half the thrill of this wickedly absorbing tale."--O: The Oprah Magazine

"An ingenious and viperish thriller . . . Even as Gone Girl grows truly twisted and wild, it says smart things about how tenuous power relations are between men and women, and how often couples are at the mercy of forces beyond their control. As if that weren't enough, Flynn has created a genuinely creepy villain you don't see coming. People love to talk about the banality of evil. You're about to meet a maniac you could fall in love with." --Jeff Giles, Entertainment Weekly "An irresistible summer thriller with a twisting plot worthy of Alfred Hitchcock. Burrowing deep into the murkiest corners of the human psyche, this delectable summer read will give you the creeps and keep you on edge until the last page."--People (four stars)

"It's simply fantastic: terrifying, darkly funny and at times moving. . . . [Gone Girl is] her most intricately twisted and deliciously sinister story, dangerous for any reader who prefers to savor a novel as opposed to consuming it whole in one sitting."--Michelle Weiner, Associated Press "Gillian Flynn's third novel is both breakneck-paced thriller and masterful dissection of marital breakdown. . . . Wickedly plotted and surprisingly thoughtful, this is a terrifically good read."--Boston Globe "Gone Girl is that rare thing: a book that thrills and delights while holding up a mirror to how we live. . . . Through her two ultimately unreliable narrators, Flynn masterfully weaves the slow trickle of critical details with 90-degree plot turns. . . . Timely, poignant and emotionally rich, Gone Girl will peel away your comfort levels even as you root for its protagonists--despite your best intuition." --San Francisco Chronicle "Gillian Flynn's barbed and brilliant Gone Girl has two deceitful, disturbing, irresistible narrators and a plot that twists so many times you'll be dizzy."--Minneapolis Star-Tribune "Flynn is a master manipulator, deftly fielding multiple unreliable narrators, sardonic humor, and social satire in a story of a marriage gone wrong that makes black comedies like The War of the Rosesand Who's Afraid of Virginia Woolf look like scenes from a honeymoon. . . . It is, in a word, amazing."--Yvonne Zipp, Christian Science Monitor

"Gone Girl [is] a thriller with an insane twist and an insidiously realistic take on marriage."--New York

"Brilliantly constructed and consistently absorbing . . . The novel, which twists itself into new shapes, works as a page-turning thriller, but it's also a study of marriage at its most destructive."--Columbus Dispatch

Gillian Flynn is the author of the #1 New York Times bestseller Gone Girl, for which she wrote the Golden Globe-nominated screenplay, and the New York Times bestsellers Dark Places and Sharp Objects. A former critic for Entertainment Weekly, she lives in Chicago with her husband and children.
If the item details above aren’t accurate or complete, we want to know about it.

4 out of 5 stars
Linda - 8 years ago
Very intriguing story line.....took a few 'chapters' to get into but then took off like a rocket with suspense.
4 guests found this review helpful. Did you?