The Jasmine Throne - (The Burning Kingdoms) by Tasha Suri (Paperback) 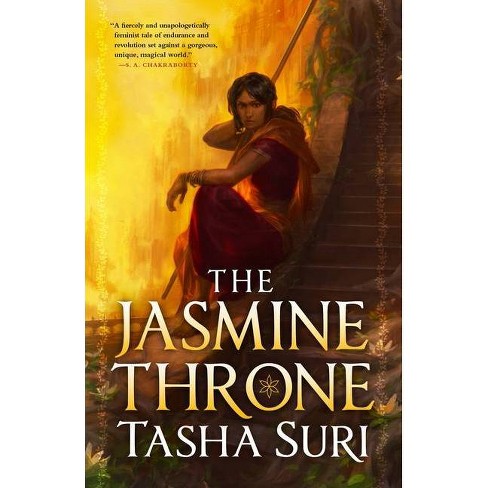 NAMED ONE OF THE BEST BOOKS OF 2021 BY PUBLISHERS WEEKLY, LIBRARY JOURNAL, BOOKLIST, AND THE NEW YORK PUBLIC LIBRARY A ruthless princess and a powerful priestess come together to rewrite the fate of an empire in this "fiercely and unapologetically feminist tale of endurance and revolution set against a gorgeous, unique magical world" (S. A. Chakraborty, author of the The City of Brass). Exiled by her despotic brother, princess Malini spends her days dreaming of vengeance while imprisoned in the Hirana: an ancient cliffside temple that was once the revered source of the magical deathless waters but is now little more than a decaying ruin. The secrets of the Hirana call to Priya. But in order to keep the truth of her past safely hidden, she works as a servant in the loathed regent's household, biting her tongue and cleaning Malini's chambers. But when Malini witnesses Priya's true nature, their destinies become irrevocably tangled. One is a ruthless princess seeking to steal a throne. The other a powerful priestess desperate to save her family. Together, they will set an empire ablaze. Praise for The Jasmine Throne: "Raises the bar for what epic fantasy should be." --Chloe Gong, author of These Violent Delights "An intimate, complex, magical study of empire and the people caught in its bloody teeth. I loved it." --Alix E. Harrow, author of The Once and Future Witches "Gripping and harrowing from the very start." --R. F. Kuang, author of The Poppy War "Suri's incandescent feminist masterpiece hits like a steel fist inside a velvet glove. Simply magnificent." --Shelley Parker-Chan, author of She Who Became the Sun "A fierce, heart-wrenching exploration of the value and danger of love in a world of politics and power." --Publishers Weekly (starred review) "This cutthroat and sapphic novel will grip you until the very end." --Vulture "Lush and stunning....Inspired by Indian epics, this sapphic fantasy will rip your heart out." --BuzzFeed News

"The Jasmine Throne pulls you under, sweeping you away on a current of gorgeous prose and intricately imagined magic and politics. Filled with sharply-drawn characters who ache with longing: for peace, for war, for one another. It left me breathless."--Andrea Stewart, author of The Bone Shard Daughter

"A masterpiece. Suri continues to storm the realm of epic fantasy. The Jasmine Throne is the powerful, female-centric series I've hungered for--with deftly-woven prose and a pair of glorious women destined to wreck your heart."--Heather Walter, author of Malice

"This powerful series opener will undoubtedly reshape the landscape of epic fantasy for years to come."--Booklist (starred review)

"The Jasmine Throne more than lives up to the hype with its rich and expansive world, compelling characters, cool magic system and Suri's excellent writing, which holds it all together."--BookPage (starred review)

"This is a powerful and intense opening to an epic trilogy. Glorious....Lush, evocative, richly characterised, emotionally dense, with a scope that at first seems intimate and turns out to be much, much larger. Suri's skill--never minor--here seems to have taken a step or three up: there are few epic fantasies I have enjoyed, or admired, as greatly."--Liz Bourke, Tor.com

"The Jasmine Throne raises the bar for what epic fantasy should be. Tasha Suri has created a beautiful, ferocious world alongside an intimate study of the characters who will burn it all down."--Chloe Gong, author of These Violent Delights

"The Jasmine Throne is a riveting and gorgeously-written tale set in an intricate, expansive world. [The characters] will live in my imagination for a long time to come, and I cannot wait to see what happens next!"--Genevieve Gornichec, author of The Witch's Heart

"Like the magic in this tale of reclaiming power, The Jasmine Throne will work its way under your skin with Suri's compelling characters and gorgeous, effortless prose."--Sam Hawke, author of City of Lies

"Suri astounds with the spellbinding epic fantasy that launches her Burning Kingdoms trilogy....a fierce, heart-wrenching exploration of the value and danger of love in a world of politics and power....Suri's confident and passionate prose expertly guides the reader throughout. This is a blade-sharp, triumphant start to what promises to be an exciting series."--Publishers Weekly (starred review)

"Tasha Suri writes the female characters I didn't realize I was aching to see in fantasy, to devastating effect. The Jasmine Throne is a fiercely and unapologetically feminist tale of endurance and revolution set against a gorgeous, unique magical world."
--S. A. Chakraborty, author of The City of Brass

Tasha Suri was born in London to Punjabi parents. She studied English and Creative Writing at Warwick University, and is now a cat-owning librarian in London. A love of period Bollywood films, history, and mythology led her to write South Asian-influenced fantasy.
If the item details above aren’t accurate or complete, we want to know about it. Report incorrect product info.