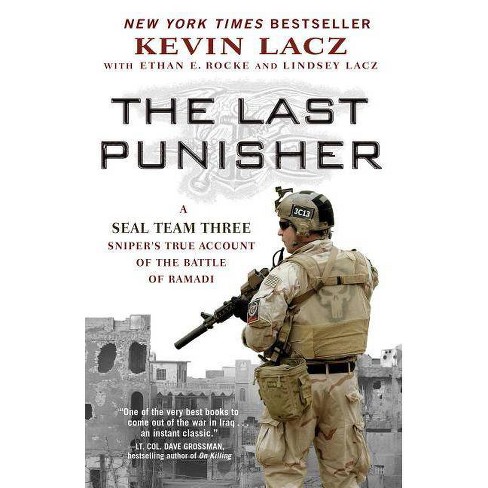 $11.39
MSRP$16.00
no reviews yet
be the first!be the first! ratings
Shipping
Free standard shipping with RedCard
Loading, please wait...
Help us improve this page

"One of the very best books to come out of the war in Iraq," (Lt. Col. Dave Grossman, bestselling author of On Killing), The Last Punisher is a gripping and intimate on-the-ground memoir from a Navy SEAL who was part of SEAL Team THREE with American Sniper Chris Kyle. Experience his deployment, from his first mission to his first kill to his eventual successful return to the United States to play himself in the Oscar-nominated film directed by Clint Eastwood and starring Bradley Cooper. The Last Punisher is a "thoughtful, funny, and raw...always compelling" (Bing West, New York Times bestselling author of No True Glory) first-person account of the Iraq War. With wry humor and moving testimony, Kevin Lacz tells the bold story of his tour in Iraq with SEAL Team THREE, the warrior elite of the Navy. This legendary unit, known as "The Punishers," included Chris Kyle (American Sniper), Mike Monsoor, Ryan Job, and Marc Lee. These brave men were instrumental in securing the key locations in the pivotal 2006 Battle of Ramadi. Minute by minute, Lacz relays the edge-of-your-seat details of his team's missions in Ramadi, offering a firsthand glimpse into the heated combat, extreme conditions, and harrowing experiences they faced every day. Through it all, Lacz and his teammates formed unbreakable bonds and never lost sight of the cause: protecting America with their fight. "A rare glimpse into the mind of a Navy SEAL," (Clint Emerson, New York Times bestselling author of 100 Deadly Skills) Kevin Lacz brings you onto the battlefield and relays the tough realities of war. At the same time, Lacz shares how these experiences made him a better man and how proud he is of his contributions to one of this country's most difficult military campaigns. The Last Punisher is the story of a SEAL and an "honest-to-God American hero" (Mike Huckabee, #1 bestselling author) who was never afraid to answer the call.
If the item details above aren’t accurate or complete, we want to know about it. Report incorrect product info.