The Law of Success - by Napoleon Hill (Paperback) 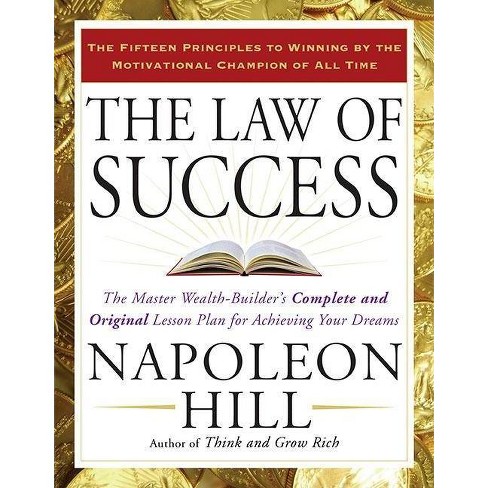 Originally produced by Hill in 1928 as an eight-book series, "The Law of Success" is now available to contemporary readers in a single edition. This work encompasses the golden keys to Hill's mind-power method for achieving goals.

Here is the Holy Grail of success philosophy: Napoleon Hill's complete and original formula to achievement presented in fifteen remarkable principles--now newly designed in a handsome single-volume edition. This is the master volume of the extraordinary work that began the career of Napoleon Hill. Originally produced by Hill in 1928 as an eight-book series, The Law of Success is now available to contemporary readers in a single edition, redesigned and reset for ease of reading. The Law of Success is the golden key to Hill's thought--his complete and unabridged mind-power method for achieving your goals. After interviewing dozens of industrialists, diplomats, thought leaders, and successful people from all walks of life, the young Hill distilled what he learned into these fifteen core lessons, organized with an introductory chapter, 'The Master Mind, ' that serves as a primer to Hill's overall philosophy. As Hill saw it, these lessons work as a mind stimulant that will cause the student to organize and direct to a DEFINITE end the forces of his or her mind, thus harnessing the stupendous power which most people waste. While future classics of Napoleon Hill would inspire millions of readers, there is no substitute for The Law of Success for everyone who wants to grasp the full range of Hill's ideas and tap their transformative power.

"May I congratulate you on your persistence. Any man who devotes that much time...must of necessity make discoveries of great value to others. I am deeply impressed by your interpretation of the "Master Mind" principles which you have so clearly described."
--President Woodrow Wilson
"My Dear Mr. Hill: Allow me to express my appreciation of the compliment you have paid me in sending me the original manuscript of Law of Success. I can see you have spent a great deal of time and thought in its preparation. Your philosophy is sound and you are to be congratulated for sticking to your work over so long a period of years. Your students...will be amply rewarded for their labor."
--"Thomas A. Edison"
"My Dear Mr. Hill: I have now had an opportunity to finish reading your Law of Success textbooks, and I wish to express my appreciation of the splendid work you have done in this philosophy. It would be helpful if every politician in the country would assimilate and apply the 16 principles upon which the Law of Success is based. It contains some very fine material which every leader in every walk of life should understand."
-- President William H. Taft
"By applying many of the 16 fundamentals of the Law of Success philosophy we have built a great chain of successful stores. I presume it would be no exaggeration of fact if I said that the Woolworth Building might properly be called a monument to the soundness of these principles."
--"F. W. Woolworth"
"Dear Mr. Hill: Thank you for your Law of Success. It is great stuff."
--Cyrus H. K. Curtis, " Publisher of Saturday Evening Post, Ladies Home Journal"
"I know that you are doing a world of good with your Law of Success. I would not care to set a monetary value on this training because it brings to the student qualities which cannot be measured by money alone."
--George Eastman
"I know that your 16 fundamentals for success are sound because I have been applying them in my business for more than 30 years."
--John Wanamaker
"Mastery of the Law of Success philosophy is the equivalent of an insurance policy against failure."
--Samuel Gompers
Whatever success I may have attained I owe, entirely, to the application of your 16 fundamental principles of the Law of Success. I believe I have the honor of being your first student."
--William Wrigley, Jr.

Napoleon Hill was born in 1883 in Virginia and died in 1970 after a long and successful career as a lecturer, an author, and as a consultant to business leaders. Think and Grow Rich is the all-time bestseller in its field, having sold 15 million copies worldwide, and sets the standard for today's motivational thinking.
If the item details above aren’t accurate or complete, we want to know about it. Report incorrect product info.