The List of Unspeakable Fears - by J Kasper Kramer (Paperback) 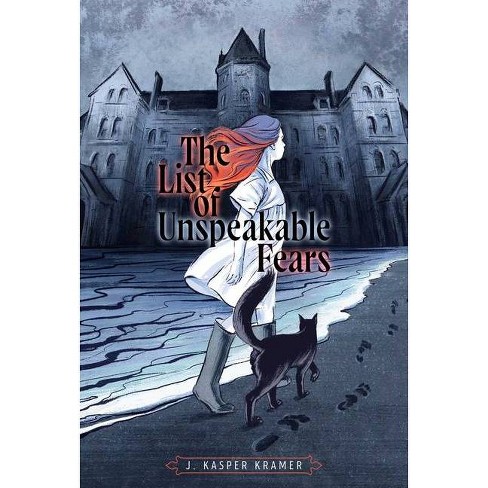 The War That Saved My Life meets Coraline in this "deliciously creepy" (Publishers Weekly, starred review) middle grade historical novel following an anxious young girl learning to face her fears--and her ghosts--against the backdrop of the typhoid epidemic. Essie O'Neill is afraid of everything. She's afraid of cats and electric lights. She's afraid of the silver sick bell, a family heirloom that brings up frightening memories. Most of all, she's afraid of the red door in her nightmares. But soon Essie discovers so much more to fear. Her mother has remarried, and they must move from their dilapidated tenement in the Bronx to North Brother Island, a dreary place in the East River. That's where Essie's new stepfather runs a quarantine hospital for the incurable sick, including the infamous Typhoid Mary. Essie knows the island is plagued with tragedy. Years ago, she watched in horror as the ship General Slocum caught fire and sank near its shores, plummeting one thousand women and children to their deaths. Now, something on the island is haunting Essie. And the red door from her dreams has become a reality, just down the hall from her bedroom in her terrifying new house. Convinced her stepfather is up to no good, Essie investigates. Yet to uncover the truth, she will have to face her own painful history--and what lies behind the red door.

J. Kasper Kramer is the author of the acclaimed novel The Story That Cannot Be Told as well as The List of Unspeakable Fears. She's an author and English professor in Chattanooga, Tennessee. She has a master's degree in creative writing and once upon a time lived in Japan, where she taught at an international school. When she's not curled up with a book, Kramer loves researching lost fairy tales, playing video games, and fostering kittens. Visit her at JKasperKramer.com.
If the item details above aren’t accurate or complete, we want to know about it.

Stroke of Midnight - (Kingdom of Wrenly) by Jordan Quinn

The Door of No Return - by Kwame Alexander (Hardcover)

A Wolf for a Spell - by Karah Sutton

How to Be Brave - by Daisy May Johnson

God, Jesus, and Other Foolishness - by Jeffrey A Kramer (Paperback)

The City of Unspeakable Fear - by Jean Ray (Paperback)

I Am a Crooked Boy - by Judi Kramer (Paperback)