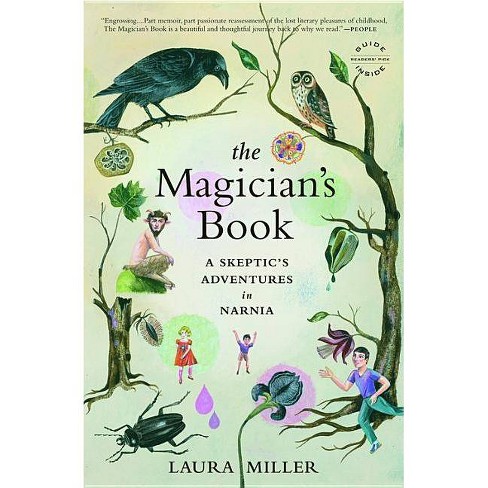 THE MAGICIAN'S BOOK is the story of one reader's long, tumultuous relationship with C.S. Lewis' The Chronicles of Narnia. As a child, Laura Miller read and re-read The Lion, the Witch and the Wardrobe and its sequels countless times, and wanted nothing more that to find her own way to Narnia. In her skeptical teens, a casual reference to the Chronicles's Christian themes left her feeling betrayed and alienated from the stories she had come to know and trust. Years later, convinced that "the first book we fall in love with shapes us every bit as much as the first person we fall in love with," Miller returns to Lewis's classic fantasies to see what mysteries Narnia still holds for adult eyes--and is captured in an entirely new way.

In her search to uncover the source of these small books' mysterious power, Miller looks to their creator, Clive Staples Lewis. What she discovers is not the familiar, idealized image of the author, but a man who stands in stark contrast to his whimsical creation-scarred by a tragic and troubled childhood, Oxford educated, a staunch Christian, and a social conservative, armed with deep prejudices.

THE MAGICIAN'S BOOK is an intellectual adventure story, in which Miller travels to Lewis's childhood home in Ireland, the possible inspiration for Narnia's landscape; unfolds his intense friendship with J.R.R.Tolkien, a bond that led the two of them to create the greatest myth-worlds of modern times; and explores Lewis's influence on writers like Neil Gaiman, Jonathan Franzen, and Philip Pullman. Finally reclaiming Narnia "for the rest of us," Miller casts the Chronicles as a profoundly literary creation, and the portal to a life-long adventure in books, art, and the imagination. Erudite, wide-ranging, and playful, THE MAGICIAN'S BOOK is for all who live in thrall to the magic of books.

"...Anyone who believes in the power of literature will want to savor The Magician's Book. In the end you feel as if you have had a stimulating literary conversation with a group of very smart and savvy friends."--Anita Silvey, author of 100 Best Books for Children, -

"...Reading [Miller's] thrilling new book about C. S. Lewis and his Narnia series is like sitting down with the smartest and least tendentious person you know and dishing your favorite books. I came away from this book feeling thoroughly informed, entertained, and inspired."--James Hynes, author of The Lecturer's Tale and Kings of Infinite Space, -

"Amagical weave of rich soulful criticism, at once a distinctive and insightful biography of C.S. Lewis, and a memoir of the author....I couldn't put it down."--Anne Lamott, author of Grace (Eventually), -

"There are two great pleasures to be found in THE MAGICIAN'S BOOK. One is being reminded of exactly how blissful it felt to be a child in the thrall of a book. The other is watching Miller find her way back to Narnia as an adult-where she discovers that a wiser reader is not necessarily a sadder one."--Christian Science Monitor

"This book is both a wonderful antechamber to Lewis's wardrobe portal and a convincing attempt to rescue Aslan from the Christian imagination and embed him where he has always belonged--the human imagination."--Tom Bissell, author of The Father of All Things, -

"A rewarding study by a first-rate arts writer."--Kirkus

"Empathetic, rigorous, erudite, funny, generous, and surprising....THE MAGICIAN'S BOOK abounds with a rare quality that most literary criticism lacks, the quality of hopeful longing that helped lead C. S. Lewis to imagine Narnia, the quality that he prized above almost all others: joy."--Los Angeles Times

"Weaving together her own life as a reader and C. S. Lewis's life as, among other things, a reader, a writer, a Christian, a veteran of World War I, and a friend to J.R.R. Tolkien, Miller illuminates not only the Chronicles of Narnia, but the nature of reading itself."--Time

Laura Miller is a journalist and critic. She is a cofounder of Salon.com, where she is currently a staff writer, and is the editor of The Salon.com Readers Guide to Contemporary Authors. A regular contributor to the New York Times Book Review, her work has also appeared in the New Yorker, the Los Angeles Times, Time, and other publications. She lives in New York.
If the item details above aren’t accurate or complete, we want to know about it. Report incorrect product info.