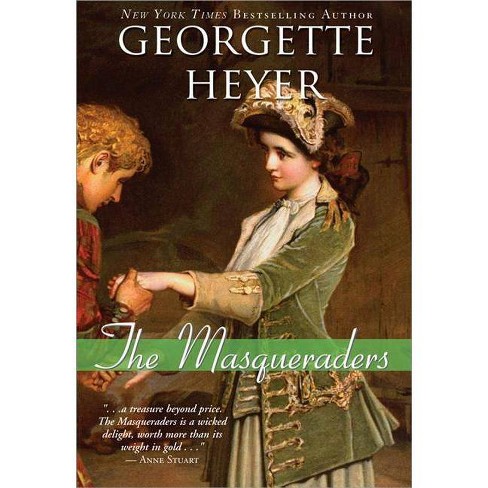 To help rescue a rich heiress, Prudence Tremaine masquerades as a man to hide her identity, which becomes rather inconvenient when she finds herself enchanted with Sir Anthony Fanshawe.

An exciting and thrilling story from bestselling author Georgette Heyer, known as the Queen of Regency romance, legendary for her research, historical accuracy, and her extraordinary plots and characterizations.

Such a daring escape...

Their infamous adventurer father has taught Prudence Tremaine and her brother Robin to be masters of disguise. Ending up on the wrong side of the Jacobite rebellion, brother and sister flee to London, Prudence pretending to be a dashing young buck, and Robin a lovely young lady.

Could cost them both their hearts...

Then Prudence meets the elegant Sir Anthony Fanshawe, and Robin becomes the mysterious hero of the charming Letitia Grayson, and in order to have what they truly want, the two masqueraders must find a way to unmask themselves without losing their lives...

Praise for Georgette Heyer and The Masqueraders:
A treasure beyond price. The Masqueraders is a wicked delight, worth more than its weight in gold.--Anne Stuart
Reading Georgette Heyer is the next best thing to reading Jane Austen.--Publishers Weekly
Wonderful characters, elegant, witty writing, perfect period detail, and rapturously romantic. Georgette Heyer achieves what the rest of us only aspire to.--Katie Fforde
What with elopements, rescues, duels, and cards, the story goes excitingly; and finally the magnificent but dubious father proves himself a Viscount. It is a picturesque and engaging story.--The Spectator

[A] deliciously implausible story... The characters are great fun. - A Hoyden's Look at Literature

A delightful romp from beginning to end. - Jane Austen's World

A fun book with interesting characters and lots of adventure... Georgette Heyer has yet to disappoint. - Good Clean Reads

A fun tale of adventurers that is filled with romance, disguises, swash buckling duels, and highwaymen. - Laura's Reviews

Georgette is truly an artist with words. - Readaholic

Georgette Heyer is quite the proficient when it comes to historical fiction and romantic romps. - Austenesque Reviews

Heyer is a comedy master... Funny yet plausible at the same time. - Books Like Breathing

Heyer! You are a fount of easy, fabulous reads! - Books I Done Read

I love the characters of this novel over anything else. - Bloody Bad Books

Romance, mystery, comedy, duels and even a murder... this was great fun. - Library Queue

The plot twists are great fun and the story is full of action. - Martha's Bookshelf

The late Georgette Heyer was a very private woman. Her historical novels have charmed and delighted millions of readers for decades, though she rarely reached out to the public to discuss her works or private life. It is known that she was born in Wimbledon in August 1902, and her first novel, The Black Moth, was published in 1921. Heyer published 56 books over the next 53 years, until her death from lung cancer in 1974. Heyer's large volume of works included Regency romances, mysteries and historical fiction. Known also as the Queen of Regency romance, Heyer was legendary for her research, historical accuracy and her extraordinary plots and characterizations. Her last book, My Lord John, was published posthumously in 1975. She was married to George Ronald Rougier, a mining engineer, and they had one son together, Richard.
If the item details above aren’t accurate or complete, we want to know about it. Report incorrect product info.