The Most Magnificent Thing - by Ashley Spires (Hardcover) 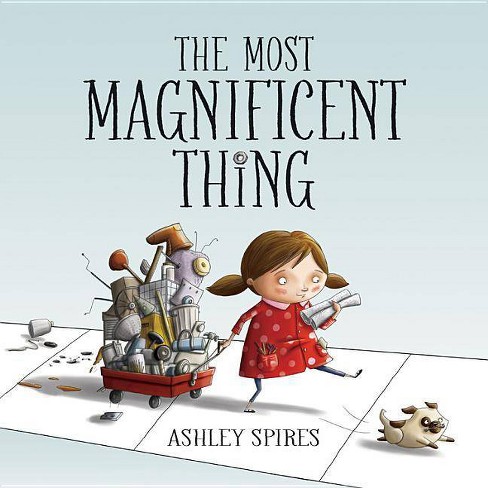 A little girl and her canine assistant set out to make the most magnificent thing. But after much hard work, the end result is not what the girl had in mind. Frustrated, she quits. Her assistant suggests a long walk, and as they walk, it slowly becomes clear what the girl needs to do to succeed. A charming story that will give kids the most magnificent thing: perspective!

Award-winning author and illustrator Ashley Spires has created a charming picture book about an unnamed girl and her very best friend, who happens to be a dog. The girl has a wonderful idea. "She is going to make the most MAGNIFICENT thing! She knows just how it will look. She knows just how it will work. All she has to do is make it, and she makes things all the time. Easy-peasy!" But making her magnificent thing is anything but easy, and the girl tries and fails, repeatedly. Eventually, the girl gets really, really mad. She is so mad, in fact, that she quits. But after her dog convinces her to take a walk, she comes back to her project with renewed enthusiasm and manages to get it just right. For the early grades' exploration of character education, this funny book offers a perfect example of the rewards of perseverance and creativity. The girl's frustration and anger are vividly depicted in the detailed art, and the story offers good options for dealing honestly with these feelings, while at the same time reassuring children that it's okay to make mistakes. The clever use of verbs in groups of threes is both fun and functional, offering opportunities for wonderful vocabulary enrichment. The girl doesn't just "make" her magnificent thing --- she "tinkers and hammers and measures," she "smoothes and wrenches and fiddles," she "twists and tweaks and fastens." These precise action words are likely to fire up the imaginations of youngsters eager to create their own inventions and is a great tie-in to learning about Science, Technology, Engineering and Math.

Young readers will love the surprise ending. Readers learn that not everything comes out "just the right way" instantly.--International Reading Association

... Spires's buddy tale of overcoming obstacles and learning to manage expectations will likely find an appreciative audience, especially in a classroom setting.--Quill & Quire

A little girl has big plans to make the most magnificent thing, with the help of her canine sidekick.--Canadian Family

An entertaining book for the very young, this is also a useful reminder that most problems can be worked out if we give it time. Spires's digital artwork does a masterful job of injecting humour.--The Montreal Gazette

In the end, it's precisely the kind of book we need for kids these days. Perfection is a myth. Banged up, beat up, good enough can sometimes be the best possible solution to a problem. A lesson for the 21st century children everywhere.--Elizabeth Bird, SLJ.com

It's a useful description of the creative process, an affirmation of making rather than buying, and a model for girl engineers.--Publishers Weekly

Spires' understanding of the fragility and power of the artistic impulse mixes with expert pacing and subtle characterization for maximum delight.--Kirkus Reviews - Starred Review

The Most Magnificent Thing captures the ups and downs of the creative process perfectly ... with honesty and even a little elegance.--Globe and Mail

The Most Magnificent Thing is a wonderful fable about effort and reward, in a tone perfectly understandable to younger children. A definite addition to public and primary school collections.--CM Magazine

This indefatigable little girl won't let frustration get in the way of creating her magnificent contraption. Determination is key!--Today's Parent

This is a solid choice with a great message that encourages kids not to quit in the face of disappointment but rather to change their perspective and start over.--School Library Journal

Without being heavy-handed, the author has shown how perseverance, determination, vision, and dealing with your emotions can pay off. Illustrations add charm to the story ... This is a good read-aloud.--Library Media Connection

Ashley Spires grew up in the Pacific Northwest, the supposed stomping grounds of Bigfoot. She is the author and illustrator of a number of books for children, including Small Saul and the Adventures of Binky the Space Cat. She was the recipient of the 2011 Silver Birch Express Award and the 2011 Hackmatack Award for Binky the Space Cat and was shortlisted for a Joe Shuster Comics for Kids Award and an Eisner Award for Binky Under Pressure. Ashley currently lives in British Columbia.

Ashley Spires grew up in the Pacific Northwest, the supposed stomping grounds of Bigfoot. She is the author and illustrator of a number of books for children, including Small Saul and the Adventures of Binky the Space Cat. She was the recipient of the 2011 Silver Birch Express Award and the 2011 Hackmatack Award for Binky the Space Cat and was shortlisted for a Joe Shuster Comics for Kids Award and an Eisner Award for Binky Under Pressure. Ashley currently lives in British Columbia.