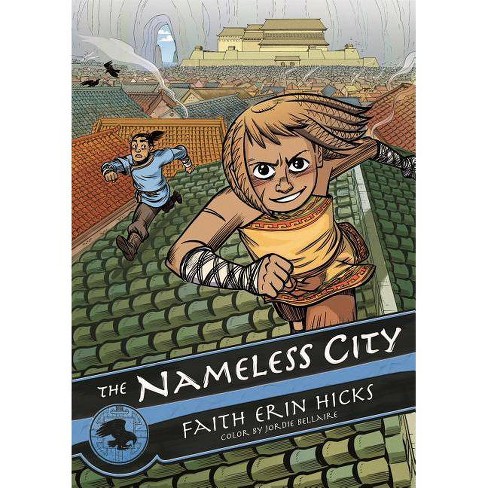 Every time it is invaded the City gets a new name, but to the natives in is the Nameless City, and they survive by not letting themselves get involved--but now the fate of the City rests in the hands of Rat, a native, and Kaidu, one of the Dao, the latest occupiers, and the two must somehow work together if the City is to survive.

Every nation that invades the City gives it a new name. But before long, new invaders arrive and the City changes hands once again. The natives don't let themselves get caught up in the unending wars. To them, their home is the Nameless City, and those who try to name it are forever outsiders.

Kaidu is one such outsider. He's a Dao born and bred--a member of the latest occupying nation. Rat is a native of the Nameless City. At first, she hates Kai for everything he stands for, but his love of his new home may be the one thing that can bring these two unlikely friends together. Let's hope so, because the fate of the Nameless City rests in their hands.

The artwork is breathtaking...lending each panel a richness that appropriately reflects a multifaceted culture. --New York Times Faith Erin Hicks breathes life into her characters with gale-force winds. The Nameless City makes you feel everything its heroes are experiencing inside and out, from adolescent angst to the scrape of terra cotta tiles under a leaping boot. --Bryan Konietzko, co-creator of Avatar: The Last Airbender Faith Erin Hicks is one of the best creators working in graphic novels today and The Nameless City is a fantastic introduction to an exciting new series. Looking forward to reading more! --Kazu Kibuishi, author of the Amulet series This tale of unexpected alliances has everything: winning characters, a sumptuous setting, and sharp observations about power and history. Hidden depths abound in The Nameless City. --Scott Westerfeld, author of Uglies and Zeroes The beauty and construction of the Nameless City will leave you breathless. Faith has created a world so detailed and believable, it makes me want to explore the back alleys to see what is there. --Jeff Smith, author of the Bone series Hicks's sequential artwork is polished, and though males hold nearly all the political power, the female characters are mighty warriors the men respect (and sometimes fear). --Publishers Weekly, starred review Offer this winning graphic novel to fans of Fullmetal Alchemist and Avatar: The Last Airbender, who will appreciate its mix of fun and adventure and its exploration of questions of identity, belonging, and history. A superb beginning. --Kirkus Reviews, starred review With comprehensive worldbuilding, well-rounded characters, and entertaining action, this expertly executed story will find a home with a wide variety of readers. --Booklist, starred review Historical fiction fans will likely find this a gripping narrative about how people adapt to, quietly fight against, but mostly just endure lives under the control of others. --The Bulletin of the Center for Children's Books Suitable for middle school but sophisticated enough to appeal to older readers, this title belongs in all libraries serving young people. --VOYA Magazine, starred review

Faith Erin Hicks is a writer and artist in Vancouver, British Columbia. Her graphic novels include Zombies Calling, The War at Ellsmere, Brain Camp (with Susan Kim and Laurence Klavan), Friends with Boys, Nothing Can Possibly Go Wrong (with Prudence Shen), the Bigfoot Boy series (with J. Torres), The Last of Us: American Dreams (with Neil Druckmann), the Eisner Award-winning The Adventures of Superhero Girl, and the Nameless City series.
If the item details above aren’t accurate or complete, we want to know about it. Report incorrect product info.