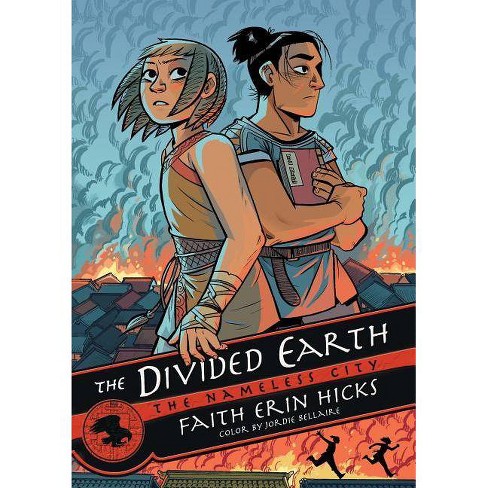 Kai and Rat must sacrifice everything for peace in the riveting, heart-thumping conclusion to the Nameless City trilogy.

The Nameless City--held by the rogue Dao prince Erzi--is under siege by a coalition of Dao and Yisun forces who are determined to end the war for the Nameless City once and for all. And the people of the city--the Named--are caught in between.

Meanwhile, Rat and Kai must infiltrate Erzi's palace and steal back the ancient and deadly formula for napatha, the ancient weapon of mass destruction Erzi has unearthed--before he can use it to destroy everything Rat and Kai hold dear! In her third and final installment in the Nameless City trilogy, Faith Erin Hicks delivers a heart-thumping conclusion. With deft world-building, frantic battle scenes, and a gentle and moving friendship at its heart, the Nameless City has earned its place as one of the great fantasy series of our time.

The Divided Earth is an engrossing, briskly paced adventure in the tradition of a good-versus-evil quest...with a cast of likeable characters, a universal theme, and compelling artwork, the graphic novel will leave readers rooting for the heroes while sympathizing with villains....Fans of the series will clamor for Hicks's next work.
--Voya, starred review

Faith Erin Hicks is a writer and artist in Vancouver, British Columbia. Her graphic novels include the Nameless City trilogy, Friends with Boys, Nothing Can Possibly Go Wrong (with Prudence Shen), and the Eisner Award-winning The Adventures of Superhero Girl.
If the item details above aren’t accurate or complete, we want to know about it. Report incorrect product info.